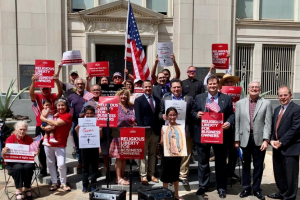 The San Antonio Family Association (SAFA) board members’ lawsuit against the City of San Antonio for religious discrimination against the conscience rights of a business owner and the banning of Chick-fil-A from public-owned San Antonio International Airport heads to the Texas Supreme Court.

The suit relates to a 2019 law that, like the abortion law, was authored by state Sen. Bryan Hughes, R-Mineola. Known as the “Save Chick-fil-A” law, it allows anyone to sue when they believe a government entity has taken “adverse actions” against a person or company based on that person’s or company’s support for a religious organization—as common sense lawmakers believed the City of San Antonio did when excluding the Chick-fil-A fast-food restaurant from its airport.

Civilian enforcement is also the key to the new state law that effectively bans abortion in Texas. This provision has so far allowed the Texas abortion law to survive a legal challenge based on Roe v. Wade. At issue in both cases—the Texas abortion ban and the Chick-fil-A ban from the San Antonio International Airport—is whether a state law can grant private citizens standing to sue?

The standing issue in the case is essentially the same,” said Jason Steed, a Dallas-based appellate lawyer and court watcher who is not involved in the case.

“That’s what’s interesting about it,” Steed continues. “The court could decide that standing issue and whatever they decide about that issue would have direct implications for SB 8 [the Texas abortion ban law].”

According to SAFA, the plaintiffs’ Chick-fil-A case is being argued by Jonathan Mitchell, former Texas solicitor general who played a central role in crafting the novel legal approach in SB8. The case is set for oral arguments on Oct. 28 (today).

MORE ABOUT THE CASE:

San Antonio must offer Chick-fil-A an airport spot as part of agreement with federal officials. Hughes said he worked with Mitchell, a former law clerk to the late U.S. Supreme Court Justice Antonin Scalia, in writing the “Save Chick-fil-A” bill.

They modeled the legislation after the Texas Medicaid Fraud Prevention Act, which similarly allows private citizens to bring suits alleging fraud and to collect a share of any money recovered.

“It was not our intent at the time to set the table for the heartbeat bill, but when we began putting the heartbeat bill together, it did make it easier since we’d already done it in the Chick-fil-A bill,” noted Sen. Bryan Hughes (R-Mineola).

The Court could dodge the issue. The city council’s decision to ban the restaurant had animated conservatives who saw it as discrimination against the company, Chick-fil-A, because its owner had years ago given money to Christian groups that oppose same-sex marriage.

It was celebrated as a victory for religious freedom.

The lawsuit currently before the Texas Supreme Court was brought on Sept. 5, 2019, by five Chick-fil-A supporters who said they were harmed because they would have been customers of the restaurant had it opened in the city-owned airport.

They note in the lawsuit that the law does not require them to prove damages and that it purports to give standing to anyone who alleges a violation. They seek a court order to stop the city from excluding the fast-foot chain from the airport and from other locations within the city in the future.

At this point it is unclear whether Chick-fil-A wants to be back in the airport, but the case remains in place.

In September 2020, San Antonio was forced to offer Chick-Fil-A its spot back as part of an agreement with the Federal Aviation Administration’s (FAA) Office of Civil Rights under the Trump administration. The settlement helped the airport avoid penalties that could have jeopardized millions of dollars in funding from the agency. But Chick-Fil-A declined, and the city has since given the spot to Whataburger.

In August of 2020, the Fourth Court of Appeals in San Antonio sided with the city and reversed a lower court’s decision, ruling that the city had sovereign immunity, a legal principle that protects governments and their agencies from lawsuits.

The city’s lawyers have also argued that the plaintiffs in the Chick-Fil-A case do not have standing to sue for several reasons, including “failure to show a statutorily-defined injury.”

“The Texas Supreme Court has repeatedly held that state court plaintiffs must prove they have the same kind of standing as federal court plaintiffs,” said Neel Lane, an attorney representing the city. “If the court drops that requirement here, it will open up municipalities to lawsuits by people who have not been injured and have no real stake in the outcome. Cities are facing enough strain already.”

But the appellate court did not wade into the standing issue because the immunity issue was enough to toss the case.

The Texas Supreme Court could dodge the matter as well, if its nine justices decide to affirm the appellate ruling.

“If they don’t want to say that the government has immunity, then they’re going to have to tackle the standing question,” Steed pointed out.

Information for this article culled from several sources including local San Antonio news and SAFA reports.