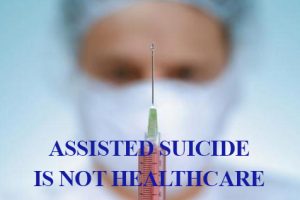 CNA—Assisted suicide contradicts the foundations of medical ethics, violates the basic standards of medical care, and threatens people who most need the assistance of the medical profession, warned a doctor who is opposing Maryland’s proposal to legalize the practice.

“If we allow this form of euthanasia into our health care system, it will inevitably corrode and destroy the values that define the health professions and lead to public trust in them,” said Dr. Joseph Marine, a Maryland cardiologist. “No one will be immune to its long-term corrosive and destructive effects on the health care system.”

Marine is a professor at Johns Hopkins University School of Medicine who has practiced medicine for close to 20 years. He is also a member of the coalition Maryland Against Physician Assisted Suicide.

His Feb. 18 essay in the Baltimore Sun made a case against a proposal in the state legislature to legalize assisted suicide.

“Physician-assisted suicide is not medical care,” Marine said. “It has no basis in medical science or medical tradition. It is not taught in medical schools or residency training programs.” The drug combinations used to end patients’ lives “come from the euthanasia movement and not from the medical profession or medical research.”

The doctor warned that “patients will not trust physicians who prescribe death.”

Laws permitting assisted suicide create a new class of “human beings denied the protection of the law” and hinders the work of medical professionals who are “committed to preserving rather than taking life,” he said.

Marine’s commentary followed the introduction of the “End-of-Life Option Act” in both chambers of the Maryland General Assembly earlier this year, listed as House Bill 399 and Senate Bill 311.

If passed, the bill would permit doctors to prescribe lethal medications to patients with a terminal illness and an estimated six months left to live, while protecting prescribing doctors from prosecution. The bill would supersede a 1999 ban on assisted suicide.

The proposal is supported by Compassion and Choices, an Oregon-based group formerly known as the Hemlock Society, which advocates for assisted suicide.

Delegate Shane Pendergrass, a Democrat from Howard County who chairs the Health and Government Operations Committee is again sponsoring the bill after previous years’ versions were withdrawn before being voted down.

“Every person is one bad death away from supporting this bill,” she said. “Many of us have been there and many of us are on the way to another one of those.”

Pendergrass said she believes the bill can pass this year, the Baltimore Sun reported. The legislation has a new co-sponsor, Senate Judicial Proceedings Committee vice-chairman Sen. Will Smith, a Montgomery County Democrat.

For Marine, physician-assisted suicide is a dangerous practice, with promised safeguards “an illusion.”

“Suicidal impulses of everyone else in society are treated with crisis intervention,” said Marine, who argued that patients who qualify for legal assisted suicide are denied such intervention and are “tacitly or explicitly encouraged to take their own lives.”

He objected to the lack of required formal psychiatric evaluation and minimal informed consent for a patient seeking assisted suicide. No witnesses are required for the consumption of the lethal drugs, and legal assisted suicide proposal lacks routine audits and impartial third-party oversight.

“In addition, physicians and other participants are given broad legal immunity and records are excluded from legal discovery or subpoena. There is no accountability,” Marine said in his Baltimore Sun essay.

In practice, assisted suicide means prescribing a non-FDA-approved lethal overdose of a drug or drugs to a person “believed to have a terminal illness.”

The lack of medical witnesses for 80 percent of patient deaths in assisted suicide means it is unknown whether complications took place.

Marine said assisted suicide advocates make false assumptions about the reliability of a terminal medical prognosis. Some patients who received a prescription for assisted suicide drugs, but did not use it, continued living for several years.

In practice, doctors are unable to determine whether a patient considered “terminal” has six months to live with “sufficient reliability,” Marine said. This means some patients would die needlessly.

The “vast majority” of doctors will not take part in assisted suicide, he added. Where it is legalized, almost all prescriptions are “written by a small handful of doctors who may know little about the patients requesting it.”

After the District of Columbia legalized doctor-assisted suicide in 2017, only two of the 11,000 licensed physicians signed up to prescribe the relevant drugs, Marine reported.

Doctor-assisted suicide has led to wider forms of euthanasia in every country that has legalized it, he said.

Marine praised Maryland’s palliative and hospice care, saying its programs are recognized as among the best in the country. He said support for these programs should be the primary focus of the state legislature, and not assisted suicide.

Maryland’s latest assisted suicide bill is the fourth proposal in five years. Similar bills were introduced in 2015, 2016 and 2017 but were withdrawn before they could be voted down.

The legislation has also drawn opposition from the Maryland Catholic Conference, the Maryland Psychiatric Society and Baltimore City Medical Society.

“As Catholics we stand firm with our partners across the state to strongly oppose this legislation,” Jennifer Briemann, executive director of the Maryland Catholic Conference, said Feb. 1.

“Our state has repeatedly rejected this group’s agenda and with good reason: assisted-suicide threatens Maryland’s most vulnerable, putting those with disabilities, the elderly, our veterans, and those battling prescription drug addiction at grave risk,” she said.

Assisted suicide is legal in seven U.S. states and the District of Columbia.