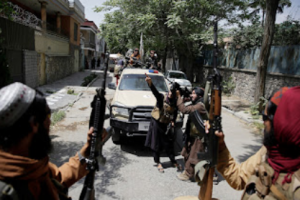 In an official statement issued this week, leaders in the underground Afghanistan church told missionary group Frontier Alliance International that Christians are being targeted for execution:

The Taliban has a hit list of known Christians they are targeting to pursue and kill. The US Embassy is defunct and there is no longer a safe place for believers to take refuge. All borders to neighboring countries are closed and all flights to and from have been halted, with the exception of private planes. People are fleeing into the mountains looking for asylum. They are fully reliant on God, who is the only One who can and will protect them.

The Taliban are going door-to-door taking women and children. The people must mark their house with an “X” if they have a girl over 12 years old, so that the Taliban can take them. If they find a young girl and the house was not marked they will execute the entire family. If a married woman 25 years or older has been found, the Taliban promptly kill her husband, do whatever they want to her, and then sell her as a sex slave.

Husbands and fathers have given their wives and daughters guns and told them that when the Taliban come, they can choose to kill them or kill themselves—it is their choice.

Taliban aim to rout out Christians

The Blaze, CBN News—One anonymous Afghan Christian leader told CBN News this week that the Taliban’s public insistence that the new regime will be inclusive and tolerant are bald-faced lies. Instead, they desire to rout out Christians from the population.

“Right now we fear elimination,” he said. “The Taliban are going to eliminate the Christian population of Afghanistan.”

The leader said he has already lost contact with other believers in different cities and he fears that the persecution has only begun.

He added that in some cases Christians are known to their communities and are obvious targets for the Taliban, who he said “are famous for carrying out” the death penalty.

Others are in hiding, but that hasn’t stopped the Taliban from searching for their identity. Taliban fighters have reportedly been rifling through people’s phones in search of Bible apps.

“We’re hearing from reliable sources that the Taliban demand people’s phones, and if they find a downloaded Bible on your device, they will kill you immediately,” Dr. Rex Rogers, president of Middle Eastern Christian TV network SAT-7 North America, told the Religious News Service.

“It’s incredibly dangerous right now for Afghans to have anything Christian on their phones. The Taliban have spies and informants everywhere,” he added.

According to Open Doors USA, Afghanistan is the world’s second most dangerous place for Christians.

Persecution notwithstanding, during the last 20 years of U.S. military occupation, several thousand Afghan people reportedly became followers of Jesus. Though any level of security they once enjoyed now appears to be gone as Taliban forces raid cities and homes.

Christians around the world are now joined in prayer for their Afghan brothers and sisters.