Can A Warning From The Past Give Us An Answer For The Present?

So much has happened over the last 30 days and we have so many blessings for which to be grateful. Even so, inner anxiety and pressure to get things done can trigger unfortunate conflicts even among those we love the most.  Wiser heads and hearts than ours, and examples from Church history, give us some practical solutions we can all put to good use…

Be the First to Make the Move

Christmas is such a special time of the year. During Advent there is much preparation for the coming of Christ; Jesus is the reason for the season. We have so much to be grateful for. I enjoyed reading the delightful and short book on generosity by Matthew Kelly—simple yet profound as he explains many ways to express or show The Generosity Habit to others.

Yet with all the reasons to be thankful and be generous to others, the 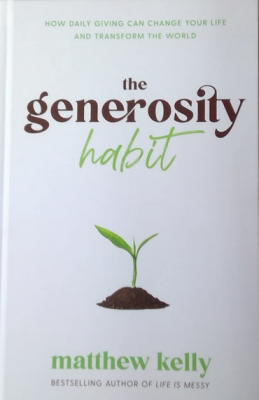 number of things to get done seems to annually increase. This leads to more pressure and anxiety, often causing things to boil over within the family.

It is so common, yet so unfortunate, that anxiety causes short tempers that can explode into words said to the ones you love most. These family blow-ups can linger, and not only ruin a holiday, but continue for months or even years.

Our Pastor, Father Dean Wilhelm, gave a wonderful homily on the feast day of the Holy Family, encouraging each of us who find this situation inside our family to be bold and “be the first one to make the move” to say, “I’m sorry,” to talk it through and get things back on an even keel.

Feast of the Holy Innocents

It was soon after Christmas that the Feast of the Holy Innocents took place. This is the story from the Gospel of Matthew 2:16-18, when Herod the Great, king of Judea, orders the execution of all male children two years old and under in the vicinity of Bethlehem. This was because the three Maji following the star visited Jerusalem to seek guidance as to where the king of the Jews had been born. King Herod directed them to Bethlehem and asked them to return and report, but the Maji are warned in a dream not to do so.

Once Herod realized he had been outwitted by the Maji, he was furious, and he gave orders to kill all the boys in Bethlehem and its vicinity who were two years old and younger, in accord with the time he had learned from the Maji.

Roe v. Wade and the Slaughter of Over 60 Million Americans by Abortion

As we know many innocent babies were killed in an around Bethlehem by King Herod’s men. Loud were the wails of mothers in the region on that day. But fortunately, the soldiers did not find the baby Jesus since the Holy Family had already fled to Egypt soon after the holy birth.

It is ironic that Sarah Weddington, the woman who argued the 1973 Roe v. Wade case before the U.S. Supreme Court that legalized abortion in America died just before Holy Innocents Feast Day.

Since the day of that tragic Roe v. Wade decision there have now been MORE THAN 60 MILLION truly innocent babies in the womb—in the United States alone—who  lost their lives by abortion.

I was a member of the Texas House of Representatives in 1973 and carried the first Pro-Life bill after the Roe v. Wade decision. My opponent on the House Floor was Representative Sarah Weddington.

I vividly remember the eight-hour House Floor debate that occurred on that bill.

While we were successful in passing the bill in the House, the bill died in the Texas Senate.

Think about the depth of that tragedy

We can imagine what each of the Holy Innocents might have accomplished during their lives, had they each been allowed to live instead of having been killed.

Even more so, imagine what each of the 60 million babies’ lost to abortion might have become—perhaps the first woman President of the United States, a discoverer of a cure for cancer, an astronaut going to Mars. Sadly, we will never know.

As I remember Sarah Weddington, I can only hope and pray for her soul; that before her last breath she asked God for forgiveness.

In 1976 the Pope was Paul VI. It was nearing time for the annual Lenten 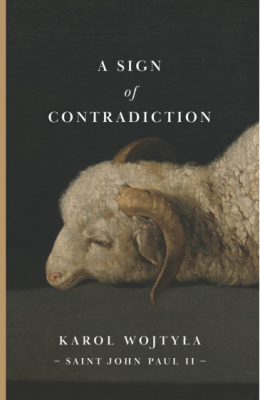 retreat when Paul VI asked the then-Cardinal Archbishop of Krakow, Poland, to present the retreat to the members of the Vatican Curia.

Karol Wojtyla’s 22 reflections are magnificent to read and ponder in the book A Sign of Contradiction. It is my belief that Pope Paul VI had seen and wanted to expose to other key Vatican officials the wisdom and unique qualities of Karol Wojtyla. These presentations, I believe, played an important role and ultimately resulted in him becoming Pope John Paul II.

Upheaval in the World

Remember 1976 is only a few short years after the Roe v. Wade decision. There is much upheaval in the world at that time and Karol Wojtyla was faced with confronting the public influence of writings and thoughts by writers such as Ludwig Feuerbach, a German anthropologist and philosopher, and his book The Essence of Christianity that strongly influenced later thinkers including Marx and Engles, etc.

Feuerbach provided his horrific, man-centered description of “religion” as follows:

“In place of love of God we ought to acknowledge love of man as the only true religion; in place of belief in God we ought to expand man’s belief in himself, in his own strength, the belief that humanity’s destiny is dependent not on a being higher than humanity but on humanity itself, that man’s only demon is man himself—primitive man, superstitious, egoistic, evil—but that similarly man’s only god is man himself.”

A Planned Attack on Religion and on Belief in God

Karoly Wojtyla was profoundly concerned with what was going on in the world. He recognized that there was a planned attack on religion and on belief in God, and he described this attack in terms of “secularization” and “secularism.”

The quotes below are taken from Karol Wojtyla’s 4th meditation; The Ways of Denial.

“While secularization attributes to earthly things their due and rightful autonomy, secularism insists that the world must be taken away from God!”

As the future Saint Pope John Paul II explained it, Proper secularization can be described as follows:

“If by the autonomy of earthly realities we mean that created things and even societies have laws and values proper to themselves, which mankind must gradually discover, use and regulate, then we are dealing with a legitimate demand which not only is put forward by men of our time but also is in conformity with the will of the Creator… Anyone who strives with humility and perseverance to fathom the secrets of reality is – without realizing it – being as it were led by the hand of God who, in keeping all things in existence, makes them to be what they are.”

But improper secularism is described as follows:

“If, instead, the expression “autonomy of earthly realities is understood to mean that created things do not depend on God, and that man can handle them in such a way as not to relate them to the Creator, then no one who believes in God can fail to see how false such an interpretation is. Without the Creator the creature vanishes.”

Man and woman since the Garden of Eden, when Satan presented temptation to them, has had to deal with the affect of temptation on human action.

“Instead he (Satan) succeeds in inducing man to turn towards the world, and to stray progressively in a direction opposed to the destiny to which he has been called. From the moment the world becomes the terrain of man’s temptation: the terrain in which man turns his back on God in various ways and in varying degrees; a terrain of rebellion rather than collaboration with the Creator; a terrain where human pride seeks not the glory of God but its own greater satisfaction.”

“When the Devil says in the third chapter of Genesis: ‘your eyes would open and you would become like God’, these words express the full range of temptation of mankind, from the intention to set man against God to the extreme form it takes today.”

“Perhaps we are experiencing the highest level of tension between the Word and the anti-Word in the whole of human history.”

We now fast-forward 48 years during which time there has been the slaughter of 60 million lost Americans and we ask “why?”

Could it be because many have succumbed to temptation and to the desire for personal self-gratification that has caused people to move away from God in the choices they make?

I see more clearly through the words of Karol Wojtyla (now better known as St. John Paul II) an explanation of what has happened to people in America (and elsewhere around the world) who have accepted the temptation of the devil by choosing abortion.

Fortunately, we have a compassionate God who will forgive anyone when he or she asks Him for forgiveness. This is why we meet each abortion-vulnerable woman at the St. John Paul II Life Center with compassion and love and accept them where each is in her own life, without judgement.

This applies also to helping those who already have had an abortion, by helping her recover from the mental trauma she is going through because of her abortion. The John Paul II Life Center helps her to find hope for her future. (For help, call 1-512-407-2900.)

Can the Values of Americans Return to Putting God First?

Could the answer be that we are living in a time where the wrong application of “secularism” has driven American society to a reliance on government to control our lives, destroy the nuclear family as the basic foundation of American society, and remove a belief in God that gives purpose to life, great hope for future generations, and a knowledge that there is a heaven when life on earth for each of us is ended?

Now is the time the Supreme Court of the United States can help change our trajectory, through its decision in the Dobbs Case (challenging a Mississippi law making abortion illegal after 12 weeks) that is slated to be decided by June 2022. The Court’s decision at that time may cause the reconsideration of Roe v. Wade and return America to a country that places God first and recognizes the sanctity of life and dignity of each person. (CBJ ed: however, we caution that our vigilance, prayers and actions to protect the dignity of human life cannot be reduced or let down, not even for a nano-second, regardless of the Court’s decision)

Let us each pray that the members of the U.S. Supreme Court can courageously make the correct decision to return the United States of America to the rightful position of protecting human life.