Being Thankful, Breaking the Poverty Cycle, and Education as a Battleground

Beginning to think about Christmas gets a power boost as we get into Advent and the four Sundays before Christmas day. Sharing the daily Bible readings of the Mass and the stories in the various daily devotionals we read gets Pat and me in a reflective mood.

There is no question that the world changed because of the birth of Jesus.

I shudder to even consider what darkness would have enveloped the world without the presence of Jesus and what His presence provided for eternal salvation of the human soul.

Advent is a Wake-Up Call

We are caught up in the information technology revolution where the forces of evil are advancing sometimes subtlety, and more often directly, how the world can function without God in a person’s life. So, Advent is like a wake-up call to get us to slow down, think about

the things we Christians know to be the important things in life – so we wait and watch for the coming of Christ at Christmas with anticipation, expectancy, and preparation.

From the Word for Today, this is the time of thanksgiving and gratitude.

Good advice is to live with a prayerful heart with every breath, say, “I trust you, Lord; I turn it over to you, for I know you have everything under control.” (John 10:10)

We must not forget to give thanks. Remember the old saying, “I grumbled because I had no shoes until I met a man who had no feet.” Don’t complain, count your blessings. Praying and bringing Jesus into our life results in many blessings.

Start your prayers of thanks now, we never know when in the blink of an eye our health can change!

Lessons from the “Covid factor”

There are lessons we should have learned within the midst of what I call the “Covid factor” – federal government actions taking away basic individual freedoms causing more government control of each person’s daily life as a country, state and community.

For example, the negative impact Covid had on our children’s education by closing down the schools, (ed. note: although it opened many parents’ eyes regarding what their children were—or were not—being taught in school and school textbooks); the full affect may not be known for years.

When we add to this the social and cultural issues already needing improvement, it is like a runaway train – very difficult to change course when already headed downhill.

In the last month, I have had two opportunities to visit with and learn from the great American, famous neurosurgeon, and former head of the US Department of Housing an

d Urban Development, Dr. Ben Carson, who said, “Your country’s history and your personal history are a part of your identity, and one’s actions tell who you are.”

The three most important activities to break the poverty cycle in America and afford all greater opportunity are: (1) don’t have a child before you marry, (2) get married, and (3) have a mother and father in the home of your children.

That’s why Dr. Carson founded and built the American Cornerstone Institute to champion conservative solutions to our nations’ toughest challenges.

The cornerstones of America have been and are Faith, Liberty, Community, and Life.

“These four cornerstones laid the foundation for the greatest nation the world has ever known. Their promotion and preservation can secure the United States of America as a beacon of hope and freedom for generations to come.”

The Carson Scholars Program and Little Patriots Learning demonstrate Dr. Carson’s belief that good education is a fundamental need for a bright future of our country and its citizens.

Education as a Battleground: See For Yourself…

I recently read an article by Dr. Larry P. Arnn, President of Hillsdale College, published in the Imprimis, and entitled “Education as a Battleground.” Following, I summarize some of Dr. Arnn’s message.

Who decides what children learn?

Dr. Arnn raises important questions including who gets to decide what children learn.

Who decides what we tell children about sex? Rearing a child has always been difficult and expensive. The family is the cradle of good citizenship and therefore should be of free and just politics. Public education is as old as our nation – but only lately has it adopted a purpose of supplanting the family and controlling parents.

History shows us that supplanting the family was the way the Soviet Union and Nazi Germany got—and today Communist China gets—control of the children, to embrace, not question and to ultimately carryout the purposes of despotic regimes.

But this could not possibly happen in America, right?  Think again…

Some would say, “Why this is not happening here, how could it happen in America?”

We do have children being turned against our country by being indoctrinated to look on its past as a shameful time of irredeemable injustice.

Also, increasingly we have children being encouraged to speak of their sexual proclivities at an age when the children can hardly think of such things. (ed. note: See PragerU for student interview clips on matters you took for granted just a few years ago, when you were in school)

Just One Example (of many, nationwide… including in schools in your city):

The revolutionary force behind this social engineering project is a set of ideas installed in just about every university today. Its smiting arm is the administrative state, an element of America’s ruling class.

The administrative state has more than 20 million employees, many of them at the federal but most at the state level. Paid for with our hard-earned tax dollars. Directly and indirectly, they make rules about half the economy, which means they affect all of it.

The teachers’ unions themselves, which claim to be defending teachers and children, are—in truth—defending an administrative system that has grown by leaps and bounds while the number of teachers has grown very little.

The key political contest of our time: It’s not what you think!

Dr. Arnn repeatedly underscores that the political contest between parents and people who make an independent living, on the one hand, and the administrative state and all its mighty forces on the other, is the key political contest of our time.

Having brought to light these examples of how our public educational system is moving children and, in fact, American society in the wrong direction requires action on the part of parents to protect their children.

What can we do to turn the tide?

Parents need to run for school boards, review textbooks for inclusion of inappropriate content, and alert others of what is going on at the schools.

Catholic schools do more to protect the child and involve the parents, but even in these schools caution is required by being alert to prevent the introduction of progressive ideology.

Each of us need to be vigilant and courageous to get involved to protect the family, education, life, freedom of religion, and freedom of conscience.

This has been a very difficult year, seeing the deep divisions in our country. Much of that division has been caused by unwarranted concentration by too many people on social media and the media outlets pushing an agenda. So much of our populace is being led without the individuals realizing how they are being led and manipulated.

Here at Christmas, let’s focus on the really important things in our life – family, friends, and cultivating positive human relationships.

As my good friend, Dr. Robert Chisholm, likes to say as a parting message,

“Thank you for blessing my life. Don’t be afraid to tell someone you love them. It may be your last chance.”

As we celebrate the birth of Christ let us, “Shine like lights in the world because you hold onto the words of life.“ (Philippians 2:15b,16a) 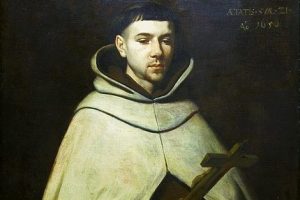 Memorial of St. John of the Cross, Priest and Doctor of the Church
Daily Mass Readings »