Raj Rajaratnam in his Uneven Justice shares his story of being handcuffed and arrested on the morning of October 2009 by five FBI agents and then convicted in Federal Court by New York’s U.S. Attorney for the Southern District, Preet Bharara for “insider trading.”

Bharara alleged that 0.02 percent of the trades between 2003-2008 by the Galleon Group which Rajaratnam’s founded were illegal. During this period, Rajaratnam did over 36,000 (thirty-six thousand) trades valued at $173 billion. The initial charges involved trades that yielded $18 to $20 million in profit when in reality these trades amounted to a net loss of approximately $30.

Rajaratnam decided to fight the charges because he was innocent. Uneven Justice details his three-year, $50 million fight for his innocence, which he lost.

I had an opportunity to watch the FBI and DOJ in action over the past 14 years as they went after three other executives I knew for alleged white-collar crimes. What was done to these people taught me that they no longer are instruments for justice and the rule of law. Rajaratnam was a victim of the extensive partisanship and politicization of the FBI and Department of Justice.

Now, as I am writing this review, we have all learned about the DOJ approved FBI raid of former President Trump’s Mar-A-Lago in Palm Beach. This unprecedented raid pulls back the curtain on what is going on with “justice and the rule of law” in the United States. If they can go after an ex-President in this manner, what can stop them from going anyone?

The raid on ex-President Trump’s home makes Uneven Justice a must read.

A poll that just came out shows that 8 of 10 Americans now believe we have a two-tiered justice system. Uneven Justice is notable as it highlights that this is not new but began at least 12-14 years ago. And it shows that the cancer we have identified is not just at the top of these organizations but has metastasized throughout them. It is clear that the DOJ and FBI have agendas and have no regard for U.S. Constitutional checks and balances.

Other recent examples that something is amiss include the House Judiciary Committee report that several whistleblowers have disclosed that the FBI leadership pressured agents to artificially pad domestic terrorism data. This comes on top of recent allegations from Senator Grassley’s Hunter Biden investigation that the FBI covered up Hunter Biden’s alleged criminal financial activity with foreign interests including China and Ukraine.

What happened to Rajaratnam was the tip of the iceberg and should have served as a warning that something is seriously wrong in our justice system.

Uneven Justice highlights the two-tiered system of justice that evolved over the past 14 years is now coming into full view. Early morning armed searches of homes (even though targets were willing to meet with prosecutors amicably), the lack of due process, and one-sided prosecutions are standard fare on the evening news.

What was once below the surface – prosecutorial overreach fueled by political ambition, FBI fabrications, judicial compliance, lies told under oath by cooperating witnesses, and the lack of accountability for government officials who subvert justice – is now in full view. The goal of our system of justice is no longer the goal of the FBI and the DOJ. Destroying people with made-up evidence and false prosecutions to set an example with a convictions is the rule of the day.

In 2018, I posted a review of Howard Root’s “Cardiac Arrest,” which outlined how federal government abuse and its disregard for the rule-of-law thwarted good people from bringing desperately needed medical products to humanity. The book detailed Root’s five-year battle with the U.S. Department of Justice (DOJ) who abused the tremendous power entrusted in it in an effort to destroy Vascular Solutions and put Root behind bars. Fighting this malicious prosecution over five years was resource intensive, involving over 100 lawyers and costing $30 million.

And you can bet that we, the taxpayer, paid much more as unscrupulous prosecutors pursued Root’s wrongful criminal conviction. In the end, Root was acquitted on all thirteen counts, without even having to present a defense. Jurors saw through the malicious prosecution. They were enraged that this case even went to trial.

Rajaratnam, the respected founder of the iconic hedge fund Galleon Group, which managed $7 billion and employed 180 people in its heyday, chose, as did Root, to go to trial rather than concede to a false narrative concocted by ambitious prosecutors looking for a scapegoat for the 2008 financial crisis.

Uneven Justice provides us with context. Rajaratnam tells us about his background, his family, his values, how he got started, the birth of Galleon, and the people he trusted and mentored.

He shares with us why he had expected to get a fair hearing in court. He was an immigrant who had achieved tremendous success in his adopted country. He trusted our system of justice and had no reason not to trust the system.

The book tells the Rajaratnam’s story of his bewildering and confounding prosecution by forces looking for a big name to prosecute. Big names generate publicity for seeking fame and promotions.

When Rajaratnam refused to support the narrative that would make that happen, he and the Galleon Group became the enemy. And he, Galleon, its employees, and its investors became victims of unethical prosecutorial conduct. The taxpayer paid the bill and with it, justice and the rule of law became collateral damage.

Uneven Justice is a book for these times. It is both a riveting page-turner and an eye-opening lesson in the vagaries of justice when an unscrupulous people are calling the shots and have agendas that are different from the oath they took to protect and serve. 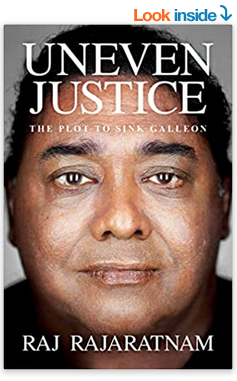 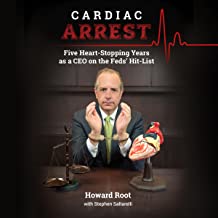