BOOK REVIEWS: Dark Agenda and Stranger in a Strange Land

Two books layout today’s cosmic battle between Good and Evil and a Path Forward for Strength, Joy and Peace exceptionally well, as you’ll see below.

Over the past year, Archbishop Carlo Vigano wrote a series of powerful letters addressing the evolving global formation of two opposing sides that he characterized as biblical, identifying the sides as: The children of light and the children of darkness.

The children of light, Vigano stated, “constitute the most conspicuous part of humanity, while the children of darkness represent an absolute minority.”

Yet the former (the children of light) are the object of discrimination which places them in a situation where they are characterized as morally inferior with respect to their adversaries.

The children of darkness often hold strategic positions in government, in politics, in the economy and in the media.

Horowitz provides recent history and the game plan that has led to the emergence of the children of darkness as a force to be understood and reckoned with.

The children of darkness see Christianity as the enemy and as the primary roadblock to the adoption of their values which are crucial in their quest for power. Horowitz sees what is underway as “the war to destroy Christian America.”

At the root of this war is the children of darkness’ belief that religion must die.

The war began with the Supreme Court’s 1962 landmark decision, Engel v. Vitale, which was the forerunner of a series of cases that would ban any discussion of God from public schools and bar religion from the public square.

Madelyn Murray, Christopher Hitchens, Margaret Sanger and many others were on the front lines pushing the boundaries that led to decisions on abortion, same-sex marriage, and religious expression. Thanks to these people and others, the Author of Life was abandoned by the very country that proudly proclaimed, “In God We Trust.” 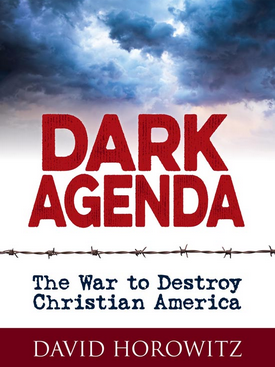 Horowitz’s Dark Agenda: The War to Destroy Christian America takes us from the beginning to today’s front lines, namely to the assault on American pluralism, the assault on basic American freedoms and on our nation’s founding principles of equality and religious liberty: the principles of life, individual liberty and freedom of religion.

Today’s front lines evolved into the creation of the religious right as a response; the emergence of the pro-life movement; the use of smears – phobic labeling, charges of sexism and racism – to suppress opposition; the establishment of a political base for the children of darkness in our educational institutions—including K-8, high school, college and university; the use of media as a propaganda machine; and the emergence of an ideology rooted in the self-destructing principle that the ends justifies the means.

Strangers in a Strange Land

Chaput in his best-selling and highly regarded Strangers in a Strange Land: Living the Christian Faith in a Post-Christian World is pastoral and tries to answer the question of how “can we live in joy and serve the common good as leaven in a culture that no longer shares what we believe…(as) we are all being held hostage by the forces of darkness.” He notes early in the book that if you are reading this book then you are probably different. “You like to think, and want to think, as a grown-up real person with a mature Catholic spirit of faith…Adults deserve adult food for thought.” And Chaput delivers.

He begins by characterizing the challenge at hand – the forces of darkness delegitimizing, dehumanizing, and destroying those who cherish the Truth. The Truth has no place in the secular heart of modern life. A central fact of modern life today is idolatry and self-indulgence. Satan, the father of lies, is alive, well, and visible.

Chaput reminds us that “today’s idols come in the shape of human will in private appetites, wrapped in a pious refusal to judge anyone else’s behavior. The more problematic the behavior, the more sacred grows the liturgy of alibis. And as these strange behaviors flower, the language of tolerance and diversity invariably hardens into repression against “haters” dashing those who hold older biblical ideas of right and wrong. 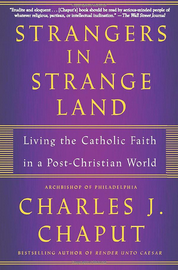 Chaput provides more detail than Horowitz on where we are now and how we got here. He urges us not to turn inward. The evil spirit of defeatism is in the air. He urges us to be happy as we have every reason to hope. We can go into battle knowing that victory has already been assured. Share our faith and take care not to lose the capacity to love. The greatest weapon we have against evil is love. “Love brought our world into being…it disarms the intellect and touches the soul.”

Chaput then speaks to the reasons for hope and how we can live as Christians with joy by answering the key questions:

Cardinal Chaput offers a path forward in response to these questions and urges us to:

It does not matter to the modern world how much of it is a lie. It cares little that every lie is an act of violence against reality and a deforming of the truth. What it really needs is the right to disguise the lying, so ‘the fact of being lied to can be easily ignored.’ This right is a strike against the dignity of the human spirit. It is our task to fight back against this impulse and restore the Truth to it’s primacy.

The Dark Agenda is in play today and it accentuates our sense that we are Strangers in a Strange Land, because indeed we are.