BOOK REVIEW: “Take Care of the People” – Seven Decades as a Priest Devoted to Pastoral Care

As he approaches his ninth decade of life, Monsignor Hilary C. Franco, author of Bishop Sheen: Mentor and Friend, has given us a gem of his reflections, Six Popes: A Son of the Church Remembers, encompassing a distinguished life that spans his nearly 70 years as a priest.

As a son of Italian immigrants from Calabria, Franco grew up in the Italian Belmont neighborhood, in the Bronx. His father, Tommaso, an old-school socialist, had a falling out with their local pastor and never set foot in a church again—until Franco’s ordination. At this time, his father presented him with parchment inscribed “Take Care of the People.” This stuck with Msgr. Franco and became the focus of his life. 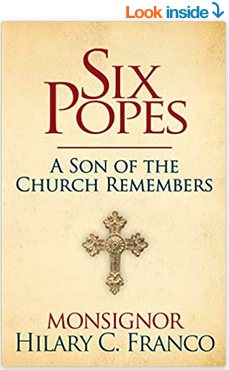 Taking care of the people

Monsignor Franco went on to become one of the highest and most influential figures of the Roman Catholic Church. In his various roles, he served six Popes—John XXIII, Paul VI, John Paul I, John Paul II, Benedict XVI and Francis—of which three are now saints.

He also became a trusted assistant and confident to Archbishop Fulton J. Sheen, which began early in his church career after being asked by Archbishop Sheen to help him prepare for Vatican II.

Over the course of his work for the church in Rome, in New York City and, at age of 80, as pastor of St. Augustine parish in Ossining, New York, Msgr. Franco interacted with U.S. presidents, foreign heads of state and religious leaders who included St. Padre Pio and St. Mother Teresa.

In Six Popes, Msgr. Franco provides tidbits and insights on most of those with whom he crossed paths.

Vatican and other tidbits

Through his work at the Vatican, this much-loved priest and author gained a macrocosmic view of the world’s problems, a global horizon, a universal approach. His perspective was not limited by a microcosmic perspective.

“The Vatican has in view the needs of all countries,” he wrote. As Msgr. Franco was invited to serve the Church in various capacities and locations, his horizons likewise expanded and he learned to look at all things globally.

“Six Popes” touches on Angelo Roncalli, who became Pope John XXIII and who was a fellow alumnus of the pontifical Lateran University. It also touches on Msgr. Franco’s experiences facing legalized segregation in the South while studying sociology at Fordham, the Vatican Ecumenical Council, the worldwide upheaval in the Church during the 1960s, efforts to overcome obstacles in Mother Angelica’s creation of EWTN, the Church’s pedophilia scandal, and most importantly, his own love of parish work.

When talking about the future, Monsignor Franco bemoans the emergence of a relativistic perspective on morality, one in which there is no longer anything that can be constituted as an absolute good or as fundamentally evil, but instead only relative value judgments. The latter being at the root of today’s pandemic of lies and divisiveness.

Six Popes: A Son of the Church Remembers is a quick and delightful read. Msgr. Franco could have made the book even better with more color on those he met along the way.