Yes, Virginia, There is a Santa Claus

There is a commonly held belief that Christmas, besides celebrating the birth of our Lord, brings what is known as a Santa Claus rally in the stock market. Since we’re approaching that time of year, I thought it might be interesting to delve into the numbers and see if this perception is truly fact or fiction.

The website Investopedia defines a Santa Claus rally as a “sustained increase in the stock market that occurs in the week leading up to December 25”. However, there is uncertainty as to the exact timing of the rally with the Motley Fool website contending that the correct period actually starts the day after Christmas and extends through the start of trading in the New Year, generally January 2nd. Investopedia reports that based on its analysis of the last 20 years, there is not a reliable Santa Claus rally.

Being an admitted investment geek, I decided to see for myself. To make a determination, I gathered data from 1950 through 2021, a period of 72 years. And since there is some debate over the timing of a rally if it exists, I looked at 12 different intervals. 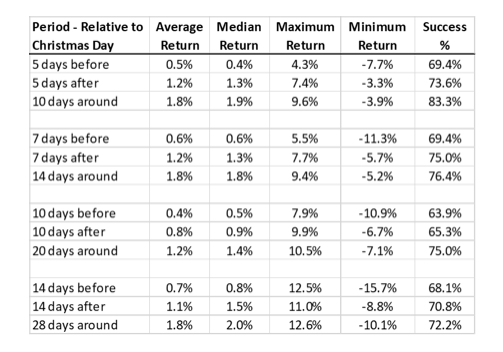 How should this data be interpreted? It seems quite clear that, regardless of the exact period comprising the Santa Claus rally, the average and median returns have been uniformly positive. Not hugely positive, but quite consistently positive over the 72 years studied. This is shown by the “Success %” column which indicates the percentage of those 72 years that produced a positive return. With all values being greater than 63%, an investor trying to take advantage of an expected rally would have a good chance of success. Be aware though, that these figures do not include any trading expenses and that those expenses would reduce the values shown. Anyone tempted to trade on this phenomenon should also be aware that there is a reasonable chance of a substantial loss, too, as shown in the “Minimum Return” column.

So, a lengthy history supports the existence of a Santa linked rally, but does Investopedia’s claim of no reliable Santa Claus rally over the last 20 years stand up to scrutiny? 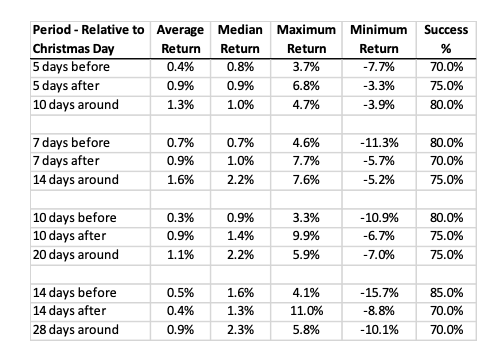 While these figures are somewhat different than those of the full 72 years, they lead to the same conclusion. Despite the Great Recession and the Covid-19 pandemic, Santa Claus has been able to deliver a stock market rally most Christmases.

Let’s hope that he can deliver higher stock prices in a difficult 2022 as well!

Thomas "Tom" Carroll, CFA, is the president of Catholic Investment Strategies, a position in which he has passionately enjoyed serving since 2012. Prior to this position,... MORE »