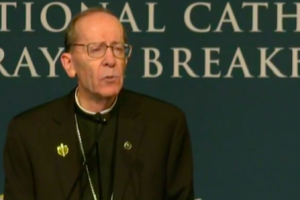 Now is the time to defend the truth, Phoenix bishop says at prayer breakfast

CNA—Bishop Thomas Olmsted of Phoenix did not mince words when he called on a gathering of the nation’s Catholic leaders to stand up to the heresies of the modern age by defending the dignity of the human person, body and soul, as an integral part of defending the faith.

Speaking at the National Catholic Prayer Breakfast on April 23, 2019, the keynote speaker noted that the importance of the human body is at the center of a contemporary moral crisis, and it is crucial to presenting the Church’s teaching in modern society.

Olmsted said that he believes the “disaster” predicted by Pope St. Paul VI in the encyclical Humanae Vitae has come to fruition. Quoting from an exhortation to the married couples of his own diocese, Bishop Olmsted said that the sexual revolution of the last century had caused humanity “a plague of misery on a scale never known before.”

“Enough! Husbands and wives, mothers and fathers, you are called to have great hearts here, counter-cultural and brave. You can build something better, freer, more generous, and nobler,” he said, insisting that rebuilding society begins in the home.

Husbands and wives have to be “all-in” for their sacramental marriage vows, explained Olmsted. This means that couples need to be open to new life, whether “by way of the marital act” or through adoption and fostering.

“Do not be afraid to sink your roots deeply into the living water that is Jesus Christ. He will not abandon you,” said Olmsted. “Lead your family, and lead in whatever other place the Lord asks, with deep and childlike faith in Him.”

The family, Olmsted said, is the sign that will defeat the heresies of the current age, all of which concern the human body.  Whether in reference to the true nature of marriage, life and gender, or the resurrection of Christ, when the dignity of the body is questioned, Olmsted said, the truth preached by the Church is cast aside, to the detriment of marriage and unborn children.

Sacramental marriage “stands now in the way of the gender ideology,” he explained, insisting that Catholics must proclaim the truth and oppose attempts to weaken marriage and the family—attempts which “do nothing to strengthen our great country.”

“Where does this blatant disregard come from?” he asked. “From a hardened heart.”

Olmsted said it is the great duty of Catholics to “stand up for each child,” offering a courageous witness for life. This, he said, requires each person to “expand our hearts to receive that child” and to “stand in the breech left by hardened hearts.”

“We Christians, then, must stand up for this reality of marriage today, in our homes and in the public square, despite the real risk of persecution for doing so,” he said.

“We can do this. We were made for such a time as this.”