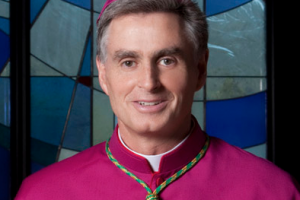 By Bishop Thomas A. Daly

Just days ago Bishop Thomas Daly wrote a clear, concise and thoughtful letter to his diocese regarding politicians who support abortion.  It is so refreshing in its clarity that we repost it here in its entirety—as follows:

Dear Friends,  Each January as the nation commemorates the sad anniversary of the Roe v. Wade decision, marches are held, and vigils are prayed. Those committed to the cause of human rights of the unborn make their voices heard. This year, pro-abortion politicians fearing increased restrictions on abortion have advocated for and passed laws expanding access to abortion in the state of New York. Similar attempts have been made in Virginia.

Efforts to expand access to abortion, allowing murder of children up to the moment of birth is evil. Children are a gift from God, no matter the    circumstances of their conception. They not only have a right to life, but we as a society have a moral obligation to protect them from harm. The champion of this abortion legislation is Andrew Cuomo, a Catholic and governor of New York. Governor Cuomo frequently cites his Catholic faith in support of legislation he favors. His public witness as a Catholic politician, coupled with his stalwart support of abortion, is unacceptable.

Politicians who reside in the Catholic Diocese of Spokane, and who obstinately persevere in their public support for abortion, should not receive Communion without first being reconciled to Christ and the Church (cf. Canon 915; “Worthiness to Receive Holy Communion. General Principles.” Congregation for the Doctrine of the Faith, 2004).

The Church’s commitment to the life of every human person from conception until death is firm. God alone is the author of life and for the civil government to sanction the willful murder of children is unacceptable. For a Catholic political leader to do so is scandalous.

I encourage the faithful to turn to our Lord in prayer for our political leaders, entrusting them especially to the intercession of St. Thomas More, a public servant who preferred to die at the hands of civil authorities rather than abandon Christ and the Church. Let us also keep the unborn, as well as all pregnant mothers, in our prayers.

Our Lady of Guadalupe, pray for us.
Live, Jesus, in our hearts forever.

Most Reverend Thomas A. Daly