Bishop Michael Barber, S.J., bishop of the Diocese of Oakland, in California, said he thought “this was it” when he was robbed at gunpoint over the weekend as he walked while praying the Rosary  before Mass. There was nothing out of the ordinary in his walk, a long-standing habit before Mass.

“I’ll mention this today and then I’ll shut up about it,” Bishop Barber said. “Yesterday, at 3 o’clock in the afternoon I was taking a walk on our neighborhood, I go out and walk in the afternoon and say the rosary, a man pulled a gun on me, pointed it at me and said ‘Give me your wallet.”

According to a KPIX Channel 5 news report, Barber said in his mind he thought his life may soon end and he may become the latest victim of deadly gun violence in Oakland.

“I was afraid. I’d rather have my life, so I gave him the ring. The ring with which I was consecrated by the archbishop when I was made a bishop. The ring that means I’m married to the Diocese of Oakland. It’s as precious to me as your wedding ring is to you.”

He said the gunman then sped away on a bike. Other than being shaken up, Barber was uninjured. 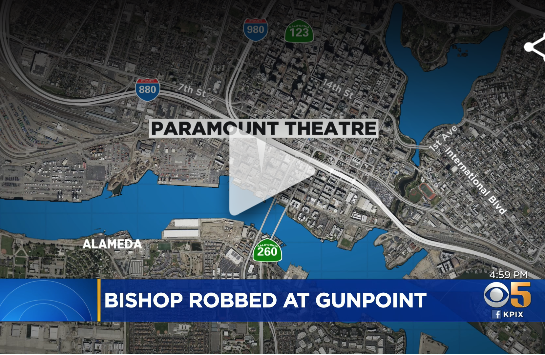 In his homily, Barber said he hopes this doesn’t happen to his parishoners, but that he forgives the suspect.

The Oakland Police Department said it was actively investigating the armed robbery. The city—one of many large cities around the country that has cut its police force significantly in response to major rioting last year—has seen a 50% increase in armed robberies this year compared to 2020.