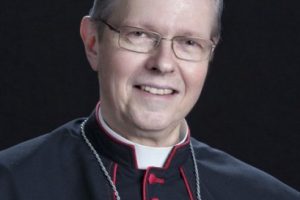 By Bishop Edward B. Scharfenberger

statement released February 13, 2017 (and worth reprinting)—“The public policy issue of defunding Planned Parenthood was the subject of demonstrations and counter-demonstrations across the country this weekend, including here in the Capital Region.

“Without question, Planned Parenthood provides some morally unobjectionable health services to women. However, this statement is not unlike saying that a man who beats his wife sometimes gives her flowers. Planned Parenthood is the unquestioned number-one pro­vider of abortions in our country. This is the primary ‘product’ for which it is known.

“Abortion is not health care; it is the intentional killing of a unique human person in his or her mother’s womb. This is a scientific fact that has nothing at all to do with religion or religious belief.

“Consistent with this scientific fact, the Catholic Church clearly teaches the objective truth that abortion is a grave moral evil, and that material cooperation in abortion is a mortal sin.

“When individuals, particularly those in political office, gloss over or ignore the core issue of whether or not taxpayers should be funding the world’s largest abortion business by citing Planned Parenthood’s other services, they are engaging in obfuscation that is, at best, confused and, at worst, dishonest.

“When such individuals publicly hold themselves out to be Catholic, their local bishop has a responsibility to offer correction, both for the well-being of the individuals’ souls and to avoid scandal among the Catholic faithful.

“Such is the unfortunate case that I, as the Bishop of Albany, find myself in today. In a local protest over the weekend advocating for the continued public funding of Planned Parenthood, three Catholic politicians — one federal, one state, and one local — not only participated, but spoke passionately on behalf of maintaining such funding.

“While any judgment of these individuals’ hearts or souls is left only to God, I am entrusted with the solemn duty of reminding them of the unambiguous teaching of our faith on the matter of abortion, informing them that it is inappropriate and confusing to the faithful to hold yourself out publicly as a Catholic while also promoting abortion, and challenging them to embrace the Gospel of Life and to renounce their public support for Planned Parenthood.

“My prayer is that these and other elected officials will come to see the truth that abortion harms women and babies, and that they courageously fight to defend the right to life of every human person from the moment of conception until natural death.”