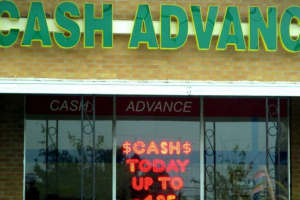 Why the USCCB is Speaking Out Against PayDay Loan Rule Rollbacks

“We encourage you to take this opportunity to strengthen, not weaken, the rule,” the letter reads, penned by the group Faith for Just Lending.

“The rule as finalized seeks to protect vulnerable individuals and families in time of financial crisis from debt traps designed around their inability–as opposed to ability–to repay their loan…We believe that the rule was a step in the right direction, but more must be done.”

The “small dollar lending” rule, which the financial agency announced in Oct. 2017, was designed to protect financially vulnerable consumers from annual interest rates of up to 300 percent on so-called payday loans and auto title loans. The bureau announced Feb. 6 that it seeks to delay the rule’s implementation until 2020 and remove key requirements on lenders.

Though an estimated 12 million customers use small-dollar loans each year, the agency has long chronicled the risks these loans pose to the vulnerable. Faced with having to repay a loan along with high interest and fees, borrowers risk “defaulting, re-borrowing, or skipping other financial obligations like rent or basic living expenses such as buying food or obtaining medical care,” according to the CFPB.

Many borrowers will end up repeatedly rolling over or refinancing their loans, racking up more debt in the process and possibly running the risk of having their vehicle seized, the bureau says.

The new rule would have required lenders to conduct a “full-payment test” to determine upfront that borrowers can afford to repay their loans within two weeks or a month without re-borrowing. It also would have capped at three the number of loans that could be given in quick succession, the CFPB said in its Oct. 2017 release.

The U.S. bishops’ conference and others said that the finalized rule would have also contained a loophole to allow customers to take out six successive 300% interest loans under certain conditions.

“This sanctioning of usurious loans not only contradicts our own faith traditions, but also contradicts the CFPB’s own reasoning laid out in its rule,” the Feb. 15 letter says.

“The CFPB recognizes in its proposal the harmful consequences of unaffordable loans, such as defaulting on expenses or having to quickly re-borrow. By the CFPB’s own reasoning, allowing six loans in a year in rapid succession, as exceptions to the assessment of a borrower’s ability to repay, is too many.”

The letter notes that Scripture provides guidance for “honorable lending and borrowing,” which includes the principles of not taking advantage of the weak, not charging usurious interest, and seeking the good of the other person.

The Catechism of the Catholic Church condemns usury as theft and a violation of the Seventh Commandment, specifically mentioning the “forcing up prices by taking advantage of the ignorance or hardship of another.”

“A business that targets vulnerable people with a product that leaves most of its customers worse off does not contribute to the common good,” the letter says.

Bishops throughout the U.S. have decried the use of payday loans, and have backed legislation which would restrict the effect these loans on have on the borrowers.

In November of 2013, Bishop Stephen Blaire of Stockton, then-chair of the committee on domestic justice and human development for the U.S. bishops’ conference, wrote the head of the Consumer Financial Protection Bureau about payday lending abuses, calling such lending immoral because it “preys on the financial hardship of poor and vulnerable consumers, exploits their lack of understanding, and increases economic insecurity.”

Bishops elsewhere have fought for payday loan reforms, like in Texas, where the state’s Catholic Conference has pushed for regulations at the state legislature.

Dr. Robert Mayer, a professor of political theory at Loyola University Chicago, told CNA in a 2016 interview that regulations on payday lenders could successfully curb lending abuses, but they could also carry adverse consequences for some people needing a fast line of credit, including perhaps those who have successfully paid off such loans in the past without incurring large amounts of debt.

This is where the Church and faith-based organizations could step in to help those who need emergency cash at a low cost, including local St. Vincent DePaul societies and Catholic Charities branches.

Local Catholic Charities in places like Salina, Kansas already have offices that can help customers refinance their debt after falling into a cycle of predatory lending. Catholic Charities in Kansas started a program in 2016 that provides small, low interest loans, with a maximum of a $1000, so that people who do have an immediate need are able to borrow funds.