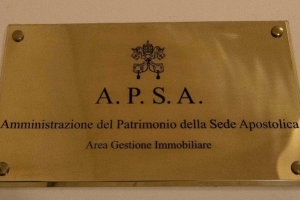 Vatican Finances: What is the transfer of institutional cash to the Vatican “central bank” all about?

CMN—A recent provision by the Secretariat for the Economy made clear that the Administration for the Patrimony of the Apostolic See manages all the Holy See’s sovereign financial activity. In short, this means that it is back to old times as far as Vatican finances are concerned. All of the accounts owned by institutional entities will be transferred to the APSA. This way, the Holy See will have a sharp separation between institutional accounts and non-institutional accounts.

Fr. Juan Antonio Guerrero Alves, prefect of the Secretariat for the Economy, signed the letter in question and delivered it to the heads of the Holy See’s dicasteries to the superiors of the entities and bodies connected with the Holy See / Vatican City State, and to the president of the Vatican City State administration, on May 8th.

The letter asked department heads to “keep the funds held in the APSA within the APSA, avoiding transfer of them toward other financial institutions,” to “transfer to the APSA the cash currently in foreign financial institutions,” and to “transfer to the APSA the cash held in accounts to the IOR.” (editor’s note: the IOR is the Institute for Religious Works, the so-called “Vatican bank).

The letter asked that all  “sovereign funds” be moved to the so-called “Vatican central bank”. Plans to centralize investments have been underway for a while. When Cardinal George Pell, then prefect of the Secretariat for the Economy, presented a major reform of the Vatican economy, he also launched the project for Vatican Asset Management (VAM), the purpose of which was to centralize investments and generate profits.

The VAM never saw the light of day. The Holy See is an institution, not a company, and so it cannot have company-like management strategies. However, the ide of centralizing the investment was not a bad one. It could be realized differently, in a manner consonant with the nature and culture of the Holy See. Bringing all the funds to APSA was one possible choice.

The APSA is also now living a transition. Recently, Fabio Gasperini was appointed secretary of the Administration. The first layman to take the position, Gasperini came from Ernst & Young and worked in the Vatican City State Administration in his younger years, before getting into the corporate world.

Gasperini is called to better frame and structure the APSA’s role and operativity.

What does the APSA do? The APSA is a “public authority” of the Holy See. One of its principal tasks is to review and authorize employment of persons and procurement contracts for the Roman Curia.

A Vatican law on procurement was also recently issued, by the way, giving force of law to some procedures already in action within the APSA.

According to the 2012 Moneyval report on the Holy See and Vatican City State, the APSA “has, since 2010, adopted specific regulations and procedures with respect to public procurement and contracts with a view: to ensure greater transparency; to uncover corrupt activities; to prevent the involvement of criminal activity in the procurement of public services and works”.

Moneyval is the Council of Europe’s committee that evaluates how States fit the anti-money laundering internationally recognized measures.

At the time of the first Moneyval report, the APSA held 23 personal accounts – 15 for the clergy and 8 for the laypeople. Already in 2001, the board of cardinals decided gradually to limit the provision of financial services to individual persons that are not organs or bodies of the Holy See and Vatican City State. The shutdown of the personal accounts began in 2006 and ended in 2015.

This does not mean that the APSA did not do, or was not supposed to do, financial activity.

Beyond the management of the salary payments for around 2,400 Holy See employees, the Extraordinary Section of the APSA also executes payment orders on behalf of various institutions of the Holy See. Moneyval also explained that the APSA, “manages the patrimony entrusted to it, having relationships with banks around the world, investing either in financial markets (deposits, equities, bonds), or in real estate in France, England, and Switzerland.”

The decision to move all of these sovereign funds to the APSA came at the end of the May 4 interdicasterial meeting. During the meeting, the heads of Vatican dicasteries discussed the Holy See’s financial situation following the COVID 19 crisis.

In April, the Vatican City State Administration had already presented a contingency plan for expenses, placing a de facto freeze on any kind of external activity and cancelling all non-essential travel.

In his letter, Fr. Guerrero mentioned the interdicasterial meeting and said that the discussion also pivoted on “the further economic measures needed to strengthen the general financial situation in this particularly negative economic outlook.”

Bottom line: The Holy See needs cash to counter the effects of the economic crisis. The transfer of sovereign funds, however, is not just about meeting the cash crunch. It is part of a broader project to centralize investments. The COVID 19 crisis  merely presented the opportunity to carry forward this process .

In the end, only the institutional accounts of the Vatican dicasteries were transferred. Unlike the APSA, the IOR holds the “non-institutional” accounts: those of Vatican employees, Catholic Church entities, institutional entities from other countries, i.e., the embassies to the Holy See.

This plan is intended to save money and increase the room for institutional oversight on the sovereign funds. The dicasteries will likely keep their independence, but yes, there will be no possibility that their financial operations will come unnoticed. This is also why the Data Elaboration Center was moved from the APSA to the Secretariat for the Economy: the APSA cannot control itself, and you need an institutional authority to oversee another institutional authority.

In the meantime, the rationalization of fund management is already underway.