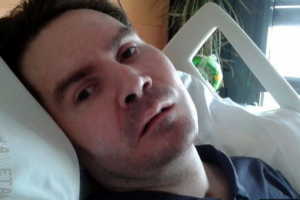 May 21, 2019—In Reims, France, the Catholic parent and two of Vincent Lambert’s siblings continue to fight for their son and brother’s life—for his right to be given basic food and water, and his right to a natural death. It has been a gruelling legal battle against the culture of death, in a country where euthanasia and physician-assisted suicide is not (yet) legal.  It has also been a media storm that only grow with time. But the last two days were among the most drammatic in this epic battle. On Monday, the French care facility where Vincent resides administered sedatives and pulled out his feeding tubes.  But In an eleventh hour court victory hailed by most as a “miracle,” Vincent Lambert’s feeding tube was restored the next day and his care resumed.

LifeSite News refers to “the last, desperate attempt of Lambert’s lawyers who assailed three courts this Monday after he was given sedatives and his feeding tube was pulled in order to lead to his death. It was the Paris court of appeal that accepted to examine the case on Monday at 5 p.m. in an emergency procedure and it decided that sedation should be stopped and food and hydration given to Vincent because of France’s obligation to respect the interim measures demanded by the UN Committee for the Rights of Disabled Persons.

Jérôme Triomphe, one of the lawyers of Viviane and Pierre Lambert and two siblings of Vincent, was overjoyed at the news.

“It’s like in 2013,” he told LifeSite: during the first end-of-life process Vincent was submitted to, it was the same team of lawyers who obtained that the handicapped man should be nourished after 31 days without food and very little water.

The Vatican News and many French television news reports and videos provide more detail of the ongoing battle for Vincent Lambert’s life, which has gone for more than 11 years.

Vatican News—Vincent Lambert is 42 years of age and has been hospitalized in Rheims since 2008 following a motorcycle accident. He is quadriplegic and has suffered severe brain damage, but he continues to breathe autonomously. While some doctors describe him as being “minimally consciousness”, others claim he is in a “chronically vegetative” state.

On Monday, medical staff began turning off the life support systems that feed and hydrate Lambert, despite appeals from his parents to the contrary. The new court ruling reverses that procedure.

Also on Monday, Pope Francis reaffirmed the position of the Church by publishing a tweet on his @Pontifex account. The text reads as follows:

“We pray for those who live with severe illness. Let us always safeguard life, God’s gift, from its beginning until its natural end. Let us not give in to a throwaway culture”.

Last year, the Pope launched two appeals for Vincent Lambert, along with the case of little Alfie Evans. Before the Regina Coeli on April 15, he said: “I entrust to your prayer people like Vincent Lambert in France and little Alfie Evans in England, and others in different countries, who live, sometimes for a long time, in a state of serious infirmity, requiring medical assistance for their basic needs. These are delicate situations that are very painful and complex. We pray that every patient will always be respected in his or her dignity, and treated in a way appropriate to their condition, with the whole-hearted contribution of family members, doctors and other health workers, and with great respect for life”.

During the General Audience of Wednesday April 18, Pope Francis added: “I would like to reiterate and strongly confirm that the only master of life, from its beginning to its natural end, is God. Our duty is to do everything to protect life”.

Appeal by Archbishop of Rheims

In a statement, the Archbishop of Rheims, Eric de Moulins-Beaufort, said: “It is the honour of a human society not to let one of its members die of hunger or thirst and to do everything possible to maintain appropriate treatment until the end.

To allow oneself to renounce it because such a cure has a cost or because it would be useless to let the human person live, would ruin the efforts of our civilization. The greatness of humanity consists in considering the dignity of its members, especially the most vulnerable, as inalienable and inviolable”.

The United Nations Committee on the Rights of Persons with Disabilities had urged France to intervene and delay the move to switch off life support while it continues to investigate further the case of Vincent Lambert.