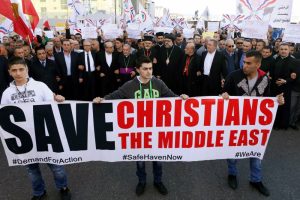 Christian Post—Despite the chronicle of horrific deaths suffered by early Christians during the vaunted “Age of Martyrs” Pope Francis said on the Feast of St. Stephen last year that the church has more martyrs today than the early church did.  His words bear repeating today.

In remarks to thousands of pilgrims who had gathered in St. Peter’s Square, Vatican City, to mark the Feast of Saint Stephen, the Church’s first martyr, Francis called on Christians to remember those who died for their Christian faith through history.

“But why does the world persecute Christians?” he asked.

“The world hates Christians for the same reason it hated Jesus: because He brought the light of God and the world prefers the darkness to hide its wicked works.

“We remember that Jesus, himself, at the Last Supper, prayed to the Father to defend Him from the spirit of worldly wickedness. There is conflict between the mentality of the Gospel and that of the world. To follow Jesus means to follow His light, which was lit on that Bethlehem night, and to abandon the darkness of the world,” he said.

He then said there are more martyrs in the Church today than in the early Church.

“Today, too, the Church, to bear witness to light and truth, experiences harsh persecution in different places, [to the point of] the supreme test of martyrdom. How many of our brothers and sisters in faith suffer abuse, violence, and are hated for Jesus’ sake! I’ll tell you something. The martyrs of today are greater in number than those of the first centuries,” he said.

“When we read the history of the early centuries, here in Rome, we read about so much cruelty toward Christians. I tell you, there is this same cruelty today, and in greater numbers with Christians. Today we want to think about them and to be close to them with our affection, our prayer and our tears,” he continued.

The Pew Research Center says more than 75 percent of the world’s population lives in areas with severe religious restrictions and many of these people are Christians, according to Christian persecution watchdog group Open Doors, which estimates that 322 Christians are killed each month for their faith.

In its latest report on Christian persecution Open Doors also cited 2015 as the deadliest year for Christians worldwide, noting that more than 7,000 Christians were killed for their faith between Nov. 1, 2014 and Oct. 31, 2015.

“The 2016 World Watch List documents an unprecedented escalation of violence against Christians, making this past year the most violent and sustained attack on Christian faith in modern history,” Open Doors CEO David Curry said.