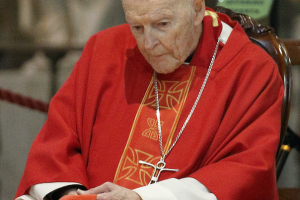 CNA—The Archdiocese of Newark released a list of names of credibly accused clergy on Wednesday, including disgraced former archbishop of the diocese Theodore McCarrick. The archdiocese listed McCarrick as “permanently removed from ministry,” although a final verdict is still pending in his canonical process.

On Feb. 13, all the Catholic dioceses of New Jersey released lists of clergy who had “credibly” been accused of sexual abuse of minors dating back to 1940.

A total of 188 clerics, including deacons, were named. The Archdiocese of Newark had the most names, with 63, and another of McCarrick’s former dioceses, Metuchen, had the fewest with 11.

The lists were released following the launch of the Independent Victims Compensation Program, which seeks to compensate those who were abused by members of the clergy as minors. The IVCP was announced earlier this week.

In a statement published on the Archdiocese of Newark website, Cardinal Joseph Tobin of Newark said that the release of the list of names was part of “an effort to do what is right and just.”

“It is our sincerest hope that this disclosure will help bring healing to those whose lives have been so deeply violated,” said Tobin. “We also pray that this can serve as an initial step in our efforts to help restore trust in the leadership of the Catholic Church.”

In the Newark list, McCarrick is appears alongside other accused clerics but, unlike other entries, it does not say if there are one or more accusations or give his assignment history. The only details given are his years of birth and ordination, and his status as “permanently removed from ministry.”

His entry also includes the note saying “Archbishop Theodore McCarrick has been included on the list based on the findings of the Archdiocese of New York that allegations of abuse of a minor against then Father McCarrick were credible and substantiated.”

After serving as a priest in the Archdiocese of New York, McCarrick was consecrated as an auxiliary bishop of that archdiocese in 1977. He was then installed as the first bishop of Metuchen in 1981.

McCarrick’s name does not appear on the list released by the Diocese of Metuchen, but its release Wednesday included a statement stating that he is “currently involved in a Church trial by the Holy See for the abuse of a minor when he was a priest of the Archdiocese of New York.”

The Archdiocese of Newark, along with the Dioceses of Metuchen and Trenton, paid a settlement in 2005 to a man who was abused by McCarrick while he was an adult seminarian.

A second settlement was paid in 2007 to another man who claimed he was abused by McCarrick while he was an adult in seminary.

Both of these settlements were kept confidential until McCarrick stepped down from the College of Cardinals in July 2018, following accusations he had abused two men as minors.

At the time of McCarrick’s first alleged abuse of minor, he was a priest of the Archdiocese of New York.

A verdict following McCarrick’s canonical process for the abuse of minors is expected any day.

McCarrick was ordered by Pope Francis to live a life of prayer and penance during the proceedings. He is currently living in a friary in Kansas and is forbidden from celebrating Mass in public.

In a statement to CNA, a spokesperson for the Archdiocese of Newark said that the archdiocese had adopted a higher standard than the ordinary canonical definition of “credible,” which is not “manifestly false or frivolous.”

“For the Archdiocese of Newark, we defined a ‘credible allegation’ as one that, after review of reasonably available, relevant information  in consultation with the Archdiocesan Review Board or other professionals, there is reason to believe it is true,” said the spokesperson.