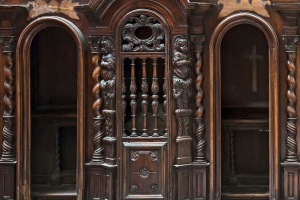 Seal of the Sacrament of Confession threatened in CA

California’s state senate will vote on a bill that would require priests to violate the seal of confession in certain limited circumstances. An amended text of the bill passed the Senate appropriations’ committee May 16.

The bill, as amended, would require priests to report to law enforcement knowledge or suspicion of child abuse gained from hearing the sacramental confessions of other priests or co-workers.

The bill originally would have required California priests to violate the seal of confession anytime they gained knowledge or suspicion of child abuse from hearing the confession of any penitent.

In a May 20 statement, Archbishop José H. Gomez of Los Angeles said the bill remains “an unacceptable violation of our religious freedoms that will do nothing to protect children.”

As amended, he said, “SB 360 still denies the sanctity of confession to every priest in the state and to thousands of Catholics who work with priests in parishes and other Church agencies and ministries.”

According to Angelus News, more than 1,300 people contacted California state senators before the May 16 hearing on the bill, encouraging senators not to require priests violate the confessional seal. Gomez expressed gratitude for those calls.

As “Mandated Reporters,” clergy in California are already required to report knowledge or suspicion of child abuse in most circumstances, though penitential conversations like sacramental confession are exempted, as are other kinds of privileged conversations, including those covered by attorney-client privilege.

The senator has claimed that such abuse has been revealed through “recent investigations by 14 attorney generals, the federal government, and other countries.”

In response to questions from CNA about those investigations, Hill’s office provided two resources to CNA. One was a news article from PBS, reporting that several states have undertaken investigations into clerical sexual abuse, but not explicitly mentioning abuse of the sacrament or seal of confession. The other was a 2017 report from Australia’s Royal Commission, appointed to investigate child sexual abuse in that country.

The Royal Commission report suggests that there should be no exemption from abuse reporting for religious confession. While the commission’s executive summary states that “the practice of the sacrament of reconciliation (confession) contributed… to inadequate institutional responses to abuse,” it does not provide data detailing the frequency of that contribution.

Hill’s office did not respond to follow-up questions about that report, or about whether the senator considers attorney-client privilege, which is not challenged by the bill, to represent a potential problem of equal proportions.

Gomez, for his part, called Catholics and lawmakers to try other approaches to fighting the child abuse in California.

“Even as amended, SB 360 remains an unacceptable violation of our religious freedoms that will do nothing to protect children. As a Catholic community, let us continue to work with lawmakers for a bill that truly advances our shared goals of fighting the scourge of child sexual abuse in our society,” Archbishop Gomez wrote.

“Penitents rely on this unbreakable guarantee to freely confess and seek reconciliation with God,” explained the California Catholic Conference.

Catholic teaching is uncompromising about the seal of the confessional “because we believe that through this sacramental encounter, a sinner accesses the healing and forgiving grace of Christ,” Los Angeles Auxiliary Bishop Robert Barron wrote recently. “In the context of Confession, the priest, we hold, is operating in the very person of Christ, and therefore, the penitent is speaking to and hearing from the Lord himself. Thus, absolutely nothing ought to stand in the way of a sinner who seeks this font of grace.”

If a penitent thought that the priest to whom he confessed were likely to share with others what was given in the most sacred confidence, “he or she would be reluctant indeed ever to approach the sacrament of Reconciliation,” Bishop Barron continued.

“It’s not a matter of trying to shield child offenders. It’s a way of giving people assurance within the context of the sacrament so they can bring before God all they have done, that is offensive before God, that is sinful, that they would have no  reservations in doing that,” San Francisco Archbishop Salvatore Cordileone said in an interview on Relevant Radio recently. If people are afraid that what they say in Confession might be known, this is sacred. We’re delving deep into people’s souls here. They have to know that they’re protected so they can have confidence to reveal all that is within their conscience and know that that will be protected.

This bill threatens all religions – far beyond only Catholics

Further, if California moves forward with its proposed law trying to force priests to violate the seal of Confession, it is not just Catholicism but all religions that will suffer, said a Dominican priest in a recent op-ed.

“If a core principle as deeply ingrained in Catholic tradition and doctrine can be wiped away this easily by the state, no fundamental rights of religion or conscience are safe.”

The proposal, California Senate Bill 360, would seek to require priests to violate the sacramental seal of confession in suspected cases of child abuse or neglect.

More than 40 professions, including clergy, are already covered by state law requiring them to notify civil authorities in cases of suspected abuse or neglect of children. Current law provides an exemption for “penitential communications” between an individual and their minister if the requirement of confidentiality is rooted in church doctrine.

The bill could be subject to a Senate vote as early as this week.

Culled from CNA and other sources