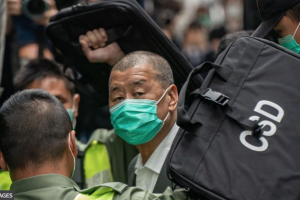 BBC—Hong Kong media mogul Jimmy Lai has been sentenced to 13 months in jail for participating in a vigil marking the 1989 Tiananmen massacre in Beijing. He was not alone.

The 74-year-old was found guilty last week of inciting others to take part in an unlawful assembly.

He was among thousands who defied a ban to attend last year’s vigil marking the killings in the Chinese capital.

More than two dozen Hong Kong politicians and activists have been charged over the vigil.

Lai was one of eight activists sentenced on Monday. They included prominent names like journalist-turned-opposition politician Gwyneth Ho and lawyer Chow Hang Tung.

“If this country still cares to maintain any resemblance of fairness, let’s put those murderers on trial instead of us. Let’s put those criminals behind bars instead of honouring them as our great leaders,” Chow Hang-tung told the court.

The sentences for the eight range from four-and-a-half months to 14 months.

Judge Amanda Woodcock announced the sentences following a mitigation hearing in which Lai’s lawyers presented a handwritten letter he had written from prison.

1/ Ahead of his sentencing over the banned Tiananmen Massacre vigil on Monday, the lawyer for pro-democracy tycoon Jimmy Lai has read out a mitigation letter in court. https://t.co/PsIphFXPLj pic.twitter.com/GFGWPPFHPu

In the letter, Lai said he was willing to suffer the penalties of his decision.

“If commemorating those who died because of injustice is a crime, then inflict on me that crime and let me suffer the punishment … so I may share the burden and glory of those young men and women who shed their blood on 4 June [1989]” Lai wrote.

Earlier in the trial, Lai had argued that he had lit candles during the vigil in a personal capacity, and had not “incited” others to join the unauthorised rally. (story continues below video clip)

However Judge Woodcock dismissed the arguments, and said their participation “was an act of defiance and protest against the police”.

Lai, who is already serving a prison sentence for an earlier charge, will serve his latest sentence concurrently.

Lai is the founder of the now-defunct Apple Daily newspaper in Hong Kong, and has been one of the most prominent supporters of the city’s pro-democracy movement.

The tycoon faces other charges – some under a sweeping national security law imposed last year, which can carry a maximum term of life in prison.

Hong Kong was handed back to China in 1997 under a deal which gave the former British colony freedoms not available in mainland China. Dozens of activists have been arrested, jailed or have fled the territory since the security law came into force.

What was the Tiananmen vigil about?