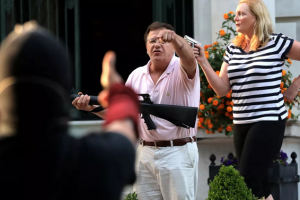 Remember this? During all those “BLM” protests… What happened AFTER?

The U.S. Supreme Court on Monday— June 6, 2022—rejected an appeal from a St. Louis couple who, fearing for their lives and property, pointed guns at Black Lives Matter (BLM) protesters in 2020.

In February, the Missouri Supreme Court indefinitely suspended the law licenses of Mark McCloskey, a  candidate for Missouri’s Senate seat, and his wife, Patricia McCloskey.

In their appeal to the U.S. Supreme Court, the couple argued that the court violated their Second Amendment rights and denied them their rights under the due process clause of the U.S. Constitution.

They had pleaded guilty in June 2021 to one count of fourth-degree assault after pointing guns at BLM protesters who were aggressively shouting and assembling outside of their home in St. Louis, but the couple was later pardoned by Missouri’s governor.