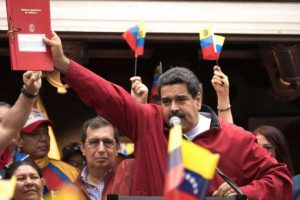 Practical Reality of Socialism: Venezuelan cardinal says Maduro has ‘led the country to a terrible ruin’

Caracas, Venezuela, Nov 4 2019-CNA—Cardinal Jorge Liberato Urosa Savino has said that if the administration of Nicolas Maduro “truly had love for Venezuela they would have already left power.”

In an interview published by the Venezuelan newspaper El Nacional, Cardinal Urosa, Archbishop Emeritus of Caracas, noted that the Maduro administration “has really led the country to a terrible ruin which is growing more and more.”

Under Maduro’s socialist administration Venezuela has been marred by violence and social upheaval, with severe shortages of food and medicine, high unemployment, blackouts, and hyperinflation. More than 4 million Venezuelans have emigrated since 2015, most of them to Colombia, Peru, the US, and Ecuador.

“They don’t want to leave now because they’re clinging to power, it would seem they don’t care about the suffering they’re causing the people, the suffering of so many people that have to leave,” the cardinal stated.

A dishonest dialogue to gain time and increase power

For the Venezuelan cardinal, “the government continues to play out a kind of a farce, a dishonest dialogue to gain time and they the completely reject what’s at the center and the root of the problems which is the inability of the current president to govern.”

The cardinal recalled that the Venezuelan bishops do not recognize “any legitimacy or validity” to the Constituent Assembly, a pro-government legislature formed by Maduro in 2017 to supersede the opposition-controlled National Assembly.

“From the point of view of the socio-political and socio-economic reality, we’re going to end up very badly, unless there is as substantial change between now and December, a change in government,” Cardinal Urosa said.

If that does not take place, he warned, “We’re going to end up very badly because the dollar continues to rise, food is more and more expensive, there are no products, healthcare is worse and education has completely collapsed. The problems continue and are going to get worse.”

“As a bishop of the Church, as a minister of Jesus Christ, let us strengthen our faith in God, our hope, and seek without violence for there to be a peaceful change for the people’s welfare,” he encouraged.

In July the Venezuelan bishops asked that Maduro resign from office, saying his exercise of the presidency is illegimate. They called for the election of a new president as soon as possible.

They cited a July 4 report from the UN human rights commissioner which said the government has committed a variety of human rights abuses, including a high number of extrajudicial killings.

Maduro was sworn in for a second term as president Jan. 10, after winning a contested election in which oppositon candidates were barred from running or imprisoned. Juan Guaidó, head of the National Assembly, declared himself interim president Jan. 23.

Guaidó has been recognized by a number of Western and Latin American governments, but has been largely unable to secure the support of Venezuela’s military. He has pledged a transitional government and free elections.

On Nov. 3 the Salvadoran president ordered Venezuelan diplomats to leave the country, as El Salvador does not recognize Maduro as the legitimate president. Among Maduro’s supporters are China, Cuba, and Russia.

In September, the US barred senior Venezuelan officials and their families from entering the country, after imposing sanctions on Venezuela the month prior.