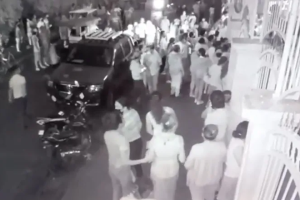 Terror in Nicaragua as Marxist dictator Ortega’s police target Catholic radio stations. What and Who will be next?


CNA—Nicaraguan police broke into Divine Mercy parish the night of Aug. 1 in the town of Sébaco in the Diocese of Matagalpa to shut down one of the five Catholic radio stations closed on Monday by the Daniel Ortega regime.

On Facebook, the parish broadcast live the arrival of the police at the parish doors as well as their entry by force.

The Catholic Channel in Sébaco also broadcast live the police raid on the Infant Jesus of Prague chapel. The station reported that the officers fired shots into the air and launched tear gas canisters to drive away the people that came out to support Father Uriel Vallejos, the director of the media outlet.

“We ask, brothers, please join us in prayer. All those who are at their homes, at this time, please, we ask you to kneel down, light a candle in front of the image of the Virgin Mary. May she protect us with her heavenly mantle,” the announcer said.

The Diocese of Matagalpa, whose bishop, Rolando Álvarez, is one of the most critical of the government, reported that the country’s regulatory agency, the Nicaraguan Institute of Telecommunications and Postal Services (TELCOR), notified him on Monday of the closure of Radio Hermanos.

“At this time we have been informed that they have also closed Our Lady of Lourdes Radio in La Dalia, Our Lady of Fatima Radio in Rancho Grande, Radio Alliens in San Dionisio, and Mount Carmel Radio in Río Blanco,” the bishop announced in his statement.

The diocese said TELCOR’s argument for closing Radio Hermanos is “that since Jan. 30, 2003, we haven’t had a valid operating license.”

However, the diocese said that on June 7, 2016, “our bishop Rolando Álvarez personally presented documentation” before said institution to request the current operating licenses for Radio Hermanos, Our Lady of Lourdes Radio in La Dalia, Our Lady of Fatima Radio in Rancho Grande, Mount Carmel Radio in Río Blanco, St. Lucy Radio in Ciudad Darío, Catholic Radio in Sebaco, and St. Joseph Radio in Matiguas.

The diocese noted that his request “was never answered.”

“All this documentation is available to TELCOR, the national and international community,” the bishop added.

During a Mass celebrated last night, Álvarez denounced that “Practically, TELCOR has

canceled all the radio stations in our diocese.”

“All our radio stations have been closed. But they won’t silence the Word of God,” the bishop stated.

In its statement, the diocese said that “we will continue to report and denounce any situation that, like this one, continues to violate the freedom of speech and religion in Nicaragua.”

On May 20, TELCOR eliminated the television channel of the Nicaraguan Bishops’ Conference from its programming.

In addition, Álvarez and Father Harvy Padilla, pastor of St. John the Baptist Church in Masaya, have been followed and harassed by the government’s police.

Álvarez, who is in charge of communications for the bishops’ conference and the Catholic Channel, said that what the government wants “is a mute Church that doesn’t announce the hope of the people” and doesn’t denounce “personal sin and structures of injustice.”

On July 6, 2022, the Ortega regime expelled 18 Missionaries of Charity from the

country on the grounds the sisters had failed to comply with various government regulations for nonprofit organizations.

There have been tensions in recent years between some Catholics and supporters of Ortega, who previously led the country for over a decade after the Sandinistas’ 1979 ouster of the Somoza dictatorship. Ortega has again been president of Nicaragua since 2007 and oversaw the abolition of presidential term limits in 2014.

Ortega’s government has accused many bishops and priests of siding with his opposition.

The changes were soon abandoned in the face of widespread, vocal opposition, but protests only intensified after more than 40 protesters were killed by security forces.

Since the protests began, there has been a series of attacks against clergy, churches, and church facilities targeted by pro-government bands.

The apostolic nuncio to Nicaragua was expelled in March.