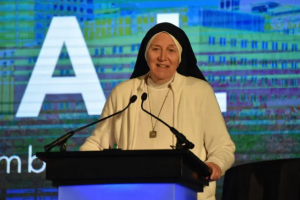 Catholics must be “battle ready” to defend the family and their faith, said Sister Deirdre Byrne, POSC, at an international pro-life conference on April 30.

Byrne, a member of the Little Workers of the Sacred Hearts of Jesus and Mary, is a surgeon and a retired colonel in the U.S. Army. She serves as the superior of her community and works at a medical clinic in Washington, D.C.

“We have to be prepared, battle ready” as “soldiers for Christ in this dark time, where every day, things seem to be ramping up about things that are against the family and faith,” she said to the 50th annual conference of the pro-life group Heartbeat International; the conference was held in-person and streamed online for attendees.

The annual conference offers training for staff, board members, and volunteers at pregnancy clinics and other pro-life ministries, along with health care and social workers.

“This battle we face is not a battle between Republicans and the Democrats, it’s not conservatives or liberals, or left versus right,” says Byrne. “This is a battle between the devil, who is real, and Our Lord.”

Byrne has spoken openly about her political beliefs, as she addressed the August 2020 Republican National Convention in support of President Trump on the life issue. On Friday, however, she explained that the “battle” facing Catholics is not a partisan one.

“This battle we face is not a battle between Republicans and the Democrats, it’s not conservatives or liberals, or left versus right,” said Byrne. “This is a battle between the devil, who is real, and Our Lord.”

Byrne said that Catholics must “fight with love” and continue to pray for elected officials.

The Biden administration recently suspended regulations of the abortion pill regimen during the pandemic, allowing for it to be prescribed and dispensed remotely instead of at a health clinic setting as previously required.

“We have to pray for these people because their soul is in a mortal state,” she said of pro-abortion elected officials.

Part of Byrne’s work at her order’s Washington, D.C. medical clinic involves attempting to reverse the effects of the abortion pill. A chemical abortion is a two-step process; the first pill cuts off the supply of nutrients to the unborn baby, and the second causes the uterus to expel the deceased baby.

“Abortion pill reversal” can occur with varying degrees of success after the first pill is taken. Byrne said on Friday that her work on abortion pill reversals has been “an incredible blessing,” and that about 60% of women who seek to reverse the effects of the first drug are able to continue their pregnancies.

During her career in the army and as a missionary, Byrne explained that she had extensive experience with injuries and death in the wake of conflict and natural disasters. She said it was “horrible to see man’s inhumanity to man” in conflict settings.

Abortion, however, is “the greatest” inhumanity,” she said. “It’s really bad because people don’t even think about it anymore, it’s become a natural thing.”

Catholics will be forced to take a stand and “pick sides” in the figurative battle, she said.

“We know that God is in charge and that He’s far greater than the devil,” said Byrne.