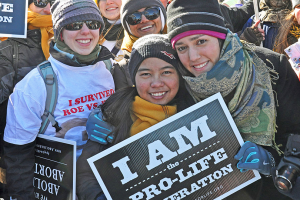 BBC—For a new wave of Generation Z anti-abortion activists, the battle to end abortion is as much about social justice as it is about faith.

Noah Slayter estimates he’s been to the US Supreme Court almost 50 times in the last five years. The 20-year-old university student, along with his friends, had become something of a fixture on the courthouse steps. Often in matching t-shirts, with placards in hand, they had been united behind one cause: an end to the constitutional right to abortion in the United States.

When the Supreme Court announced it was overturning Roe v Wade, “everyone was hugging [and] I started crying

my eyes out,” he said, recalling the moment the news came. The ruling returns the decision over abortion rights to individual states.

“Even though it’s only the first step, we truly had achieved something. We truly levelled the playing field and made it so that everyone has a voice in this country.”

Mr Slayter is a member of Students for Life, a group with more than 120,000 young anti-abortion Americans who are fighting to end the practice once and for all.

Only a quarter of Americans under the age of 30 believe abortion should be illegal in all or most cases, according to a survey by Pew Research Center. Though that view may be in the minority, this vision is becoming reality in several US states.

Now, a “Post-Roe” generation of anti-abortion activists has vowed to keep fighting until the procedure is “not just illegal, but unthinkable” across the country.

As these young activists see it, outlawing abortion in the United States is not just about religion, but also about justice and part of a larger aim to extend equal rights to everyone – including the “pre-born,” which is how the….Read full article>>