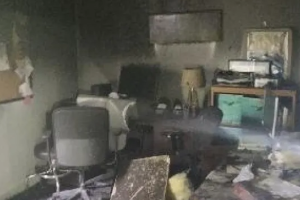 It is not the only pregnancy center damaged by rabid pro-abortionists.  Such crimes are increasing in cities across the U.S., presumably in a desperate effort to shutdown a potential shutdown of Roe v. Wade by the U.S. Supreme Court. 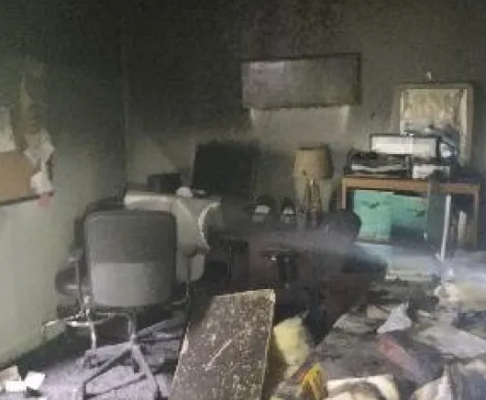 Police are investigating the Amherst incident as a possible arson. Two firefighters who responded to the scene were treated for minor injuries, Amherst police said.

Calling the damage to the clinic a “heinous crime,” Harden said that the morale of his team is high.

“The people of God are not going to let CompassCare remain homeless,” he said. “This is their ministry.”

He said that CompassCare’s facilities have remained on high alert due to the recent violence to pregnancy centers around the country. He said that the Amherst clinic had plans to install armored glass windows Tuesday morning.

“It’s an evil thing that happened, but God is in the business of turning things upside down and making them good,” he said.

Harden said that the graffiti is an apparent reference to the name of a pro-abortion activist group called Jane’s Revenge.

The Daily Signal reported that Jane’s Revenge gets its name from a 1960’s activist group, Jane Collective. NPR reported that the group aimed to provide abortions to women while it was still illegal.

In a post at Puget Sound Anarchists, the Bo Brown Memorial Cell of Jane’s Revenge claimed responsibility for the May 22 spray paint vandalism at a parish in the Archdiocese of Seattle, along with attacks on three non-Catholic churches.

Other vandalizing of pregnancy centers include:

On June 3, the Capitol Hill Pregnancy Center in Washington D.C. was vandalized with red paint and spray paint that said “Jane says revenge.”

In the early hours of May 25, Next Step Pregnancy Center in Lynnwood, Washington, was tagged with grafitti saying, “Jane’s revenge” and “If abortions aren’t safe, you aren’t either.” At least five of its windows were smashed.

In Maryland, the ​​Alpha Pregnancy Center in Reisterstown, northwest of Baltimore, was defaced with spray-painted threats May 14 including “If abortions aren’t safe, neither are you,” “Not a clinic,” and “You’re anti-choice and not pro-life.” Those messages were signed as being from “Jane’s Revenge.”

On May 8 the headquarters of Wisconsin Family Action in Madison, Wisconsin, were set on fire and graffiti was left on the building that said, “If abortions aren’t safe than you aren’t either.” The next day, Oregon Right to Life reported that Molotov cocktails were thrown at the organization’s offices in Keizer on May 8, igniting a small fire. The fire was quickly put out and no one was hurt.

Between May 7 and May 8, two women’s resource centers, Woman to Woman Resource Center and Loreto House, were vandalized in Denton, Texas, near Dallas.