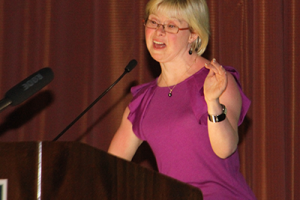 LOS ANGELES (CNA/EWTN News)—Karen Gaffney (pictured left) has swum the English Channel, is the president of a global non-profit, and has an honorary doctorate.  She’ll share her story in Los Angeles this Saturday, at an annual event designed to celebrate human dignity. She’ll also share the obstacles she’s had to overcome. “You see, I have Down syndrome, and most of the general public thinks that’s a bad thing. Even the medical community, who should know better, sometimes says it’s a bad thing,” Gaffney told the National Catholic Register in a recent interview.

“They want to screen us out before we are born, because they don’t think we are ‘made for greater.’ I don’t think they have the right to do that,” Gaffney added.

Gaffney will speak at OneLife LA, a Jan. 20 walk and celebration sponsored by the Archdiocese of Los Angeles.  She’ll be joined by actress Patricia Heaton, Bishop Robert Barron, and evangelist Damon Owens.

Beginning in downtown LA, the event will start with a mile-long walk, leading to music, food, and speakers at Los Angeles Historical State Park.

Gaffney told the National Catholic Register that she hopes participants will walk away with an understanding that all lives are made for greatness, even lives with disabilities.

Gaffney found out she had Down syndrome when she was 6 years old. Her parents told her she would face challenges but not impossible obstacles.

She explained the difference faith has made in her life.  “It was my junior year at St. Mary’s, and all the classes were getting very hard for me … Then in a religion class, I remember the teacher talking about how we live our lives, and she said that all lives are a gift from God, and what we do with our lives is our gift back to God.”

Gaffney is the founder of a non-profit group advocating for social inclusion of people with Down syndrome, called the Karen Gaffney Foundation.

She speaks often about the dangers prenatal tests pose to babies with Down syndrome.

“I always tell them that the prenatal-testing industry targets Down syndrome because it is the easiest test for them. If you can count to 27, you can evaluate the test!” she said.

Prenatal testing for Down syndrome made headlines last summer, when CBS News reported a dramatic decrease in the Down syndrome population of Iceland due to an increase in abortions.

“Iceland is on pace to virtually eliminate Down syndrome through abortion,” tweeted CBS News in August.

According to CBS News, 80-85 percent of pregnant women in Iceland take a prenatal test, and nearly 100 percent of women carrying a child with Down syndrome undergo an abortion.

When asked about the recent news, Gaffney said she was disappointed in some of the reports by CBS, but was also thankful for positive news coverage about people with Down syndrome.

“This summer, I read a story about a 17-year-old boy with Down syndrome who is a good open-water swimmer like me,” she said, noting how the boy and his father saw two young girls being pulled out to sea in Italy.

“They both dove in, and each one swam for one of the girls; they reached them and were able to bring them to safety, just as the lifeguards got there…Now, I wonder what the mother of that little girl thinks when she hears from someone in the medical community who says Down syndrome is ‘not compatible with life.’”