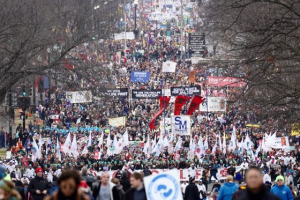 An Inside Look at Mainstream Media Filters that suppress pro-life news, especially January March for Life hundreds of thousands

A dismaying aspect of the 2019 March for Life in Washington D.C. was major media’s abrupt burial of the March’s message that “all life matters.”

Last year’s mainstream news coverage of the march focused on an unexpected minor side story, in which a Catholic high school student wearing a MAGA cap was confronted by an older man who  angrily confronted the student. That incident had little connection to the march, but most media outlets made it the lead to their stories of the march.

The confrontation was soon found to be inaccurate in its initially reported “facts” and its premise. Yet most media stayed with the MAGA story, distorting the story of the March and burying its pro-life message.

Mainline media historically give only modest attention to the March for Life compared to other events. A close and distinct parallel is seen in the annual Women’s March, also conducted in January, a week before the March for Life.  The Women’s March receives prominent and accurate media coverage. Reporting about the 2019 March for Life was substantially worse because mainstream media focused on one picture of a student wearing a MAGA cap and a Native American veteran.

Most major media shifted quickly to a story of a boy’s alleged offensive behavior toward an older man; an inaccurately reported moment that became the March for Life story in most general news media.

As it quickly became clear that the story reported was wrong. In fact, the boy did not confront the man; but instead the man came over and shouted face-to-face at the boy who had been passively waiting for his bus. The true story is that the boy was the victim, not the aggressor.

Yet most news coverage presented the boy as the aggressor, and made it their lead story related to the March.

It is very rare for a media entity to settle any claim challenging their news coverage. But CNN did make a settlement for its distorted coverage, defacto a concession that its news coverage was erroneous.
By focusing on the MAGA incident–and getting that story wrong–the March for Life message was buried by most major media.

Major media managers argue that the March for Life is nothing new. Perhaps. After all, this public march has been going on for years and the message is the same. Yet media continue to give friendly coverage to young people they like, notably a neophyte who upset a sitting congressman. She has little power in Congress yet remains a major news figure.

As the 2020 March for Life approaches, America’s media face a credibility challenge.

Will the marchers find fair coverage of the issue that brings them to Washington. Or, will media again damage its credibility by grabbing any handy diversion to once again bury the March for Life message that “all life matters.”