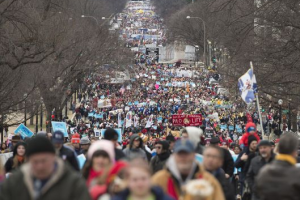 How Many Attended 2019 March for Life in DC?

Mainstream media reported “thousands” or “tens of thousands” at this year’s 2019 March for Life in Washington, D.C., that is, if they mentioned the massive pro-life walk on or near the Roe v. Wade Supreme Court decision at all.  But history, objective observation and, this year, a time-lapsed video tell quite a different story! The truth is closer to 400,000—hundreds of thousands—attended 2019 March for Life in DC.

Students for Life posted this time-lapse video of the 2019 March for Life in Washington D.C.:

March for Life president Jeanne Mancini told the crowd gathered at the National Mall for the Friday March for Life rally that she could not see the end of the crowd.

“Seriously guys, I can’t even see the end of the crowd out there. This is unbelievable. It makes me nervous to say this, but, I think you might be the largest crowd ever. Literally, I just cannot see the end of you,” she said.

The theme of this year’s march was “Unique from Day One,” to emphasize the settled biological fact that the pre-born are living, complete, and distinct human beings starting at fertilization.

Other walks for life occurred around the country and internationally last weekend with the second largest being held this coming Saturday, January 26, in San Francisco that attracts more than 50,000.   Yet again, despite the historical fact that Walk for Life West Coast is so large it shuts down — completely shuts down Market Street—the main artery in San Francisco is closed to all traffic from early morning to mid-afternoon for two miles, from the Civic Center (Van Ness Avenue) all the way to the Embarcadero—Walk For Life West Coast still receives no media coverage. Not even local coverage!

Though a 3-second mention of an anti-abortion gathering with “a couple of hundred people” is sometimes heard on the evening news, and not on all the local stations.

As any who have attended any Walk for Life in January, it is absolutely stunning to return home after having walked 2 or more miles—with throngs of people crowded in on either side, and filling the entire width of Market Street (or Pennsylvania Avenue), as far as the eye can see in either direction forward or back, experiencing the police officers  lined up on either side to keep walkers on the street, yet altogether a peaceful, prayerful sea of humanity united for unborn children — and then come home to see NOTHING about it on the news, or a dismissing account.

As an aside, I never fail to be stunned.  Why any of us would trust any of the mainstream news after such repeatedly agenda-driven and doctored non-reporting on anything pro-life is beyond me.  This has happened year after year. The blackout news coverage of hundreds of thousands of pro-life support is not new news, so why do we–who have witnessed this first-hand year after year — even give mainstream news a second consideration?  Let alone after its presidential election news coverage that dismissed and chose to not report huge crowds for one candidate and yet delivered well-embellished news reports for the other candidate who, in reality, had trouble drawing a crowd of any size.  Even mainstream coverage of our U.S. President since the election has been nothing short of agenda-driven, with near complete blackout of so much.  These days, unfiltered social media has come in handy for exposing the truth on any issue for those willing to seek it out.