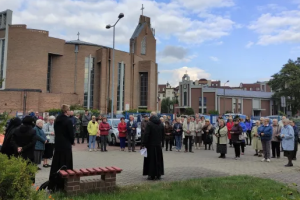 Warsaw, CNA—On Wednesday, Catholics recited the Divine Mercy Chaplet in the streets of 173 cities in Poland and 44 localities worldwide, according to organizers of the prayer event. “We believe that 10 minutes of supplication to God can change our families, cities, and the whole world,” the organizers said.

At 3 p.m. local time, street intersections and public squares in towns and villages throughout Poland turned into places of prayer for peace and for those affected by war. With rosaries in hand, the faithful asked God for mercy for all humanity. The event was held under the auspices of the Polish community Spark of Divine Mercy Team.

The Chaplet of Divine Mercy was recited on six continents for families, priests, and those holding any power in the world.

The faithful prayed for peace, especially in Ukraine. They prayed for refugees fleeing war, that they may return to their countries — and that people may be found to help them rebuild their war-damaged homes.

Locations in Poland for the coordinated Divine Mercy Chaplet included the Presidential Palace in Warsaw and the country’s largest cities: Gdańsk, Poznań, Katowice and Lublin. Organizers said that prayer events were also held in the streets of Papua New Guinea, Croatia, Argentina, Mexico, the United States, and the Ivory Coast.

The chaplet event, including the prayer on the streets of multiple cities, was held for the first time on Sept. 28, 2008, in Łódź, Poland. Since then, the initiative has continued annually, on the anniversary of the beatification of Blessed Father Michael Sopoćko, who was the confessor of St. Faustina Kowalska (1905–1938).

The consecration and entrustment of the world to the Divine Mercy represented the fulfillment of a mission for the poor, young Polish nun. She experienced visions of Jesus in which he asked her to make his message of infinite love and mercy known to the world.