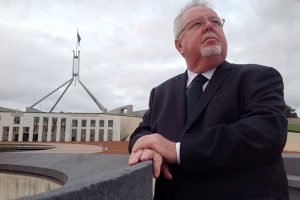 One Catholic legislator gets creative as he aims to shake up complacent colleagues on self-destructive life issues plaguing culture in general and his country in particular. Catholic Business Journal says “Bravo!” and, my goodness, talk about making one’s point!!! Brilliant.

CNA— After being slammed for his religion and told he would never understand abortion because it is a women’s issue, Australian senator Barry O’Sullivan declared himself a woman before parliament last week so that he could speak about abortion issues.

As you read this story, keep in mind, this Catholic legislator served as a sharp, well-trained investigative police officer and then a rural small businessman prior to serving in the legislator.

“I’m going to declare my gender today, as I can, to be a woman, and then you’ll no longer be able to attack me,” O’Sullivan told fellow representatives at parliament Nov. 14.

The declaration was part of longer and heated remarks given by the senator, who said he was tired of the “vomit” and “vitriol” he received from far-right colleagues whenever he tried to raise “issues around strong values.”

Earlier that week, O’Sullivan, a Catholic, had motioned for pro-choice protesters to be banned from the annual pro-life Day of the Unborn Child events. This prompted Larissa Waters of the Australian Greens party to say that O’Sullivan would never understand abortion as a women’s issue.

“Senator O’Sullivan needs to get his hands and his rosaries off my ovaries and those of the 10,000 Queensland women who have an abortion each year,” Waters said, according to the Australian Associated Press.

She later complied with a request to withdraw her comment on the grounds that it attacked O’Sullivan’s religion.

“You cannot say the word abortion without being attacked..” O’Sullivan said in his remarks Nov. 14.

“These people come and attack me for my religion…using words like ‘rosary beads’, because I had the audacity to raise issues around late-term abortions, where babies who are only minutes away from getting a smack on the ass and a name, are being aborted under the policies of the Australian Greens,” he said.

O’Sullivan said that he believes many of the “values” issues he raises, including pro-life positions, reflect the values of an “ever-increasingly silent majority” of Australians, who are afraid to speak up for fear of being attacked for their beliefs.

“I’ve moved sensible motions here, reflecting the views of many people in our society, only to have formality denied,” he said, just before declaring his gender to be a woman.

“It is despicable the behaviour of these people, for them to come in here with the freedom that they do, and that vomit, that vitriol that comes out of their mouths, it needs to be called out,” he added.

The senator’s gender-swap declaration sparked comments mostly of ridicule and disdain on social media. It also launched an extensive debate on Wikipedia about whether to change the pronouns on O’Sullivan’s page from “he/him” to “she/her.”