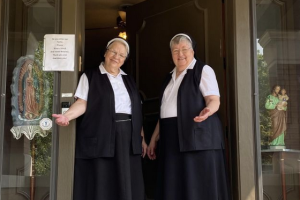 “A Chocolate Chip Cookie and a Hail Mary” approach results in Abortions slowing to a trickle at St. Louis clinic after Convent opens across the street

CNA—Tucked away near the Forest Park neighborhood of St. Louis is a brick, three-story convent dedicated to Our Lady of Guadalupe. The convent, situated in a converted home on a corner lot, is nothing spectacular to the unknowing eye.

But the convent is unique because it is located directly across the street from a Planned Parenthood clinic, the last clinic in Missouri that performs surgical abortions.

The location is intentional, and those involved with the convent say abortions at the neighboring clinic have dramatically decreased since the convent’s dedication in 2017. 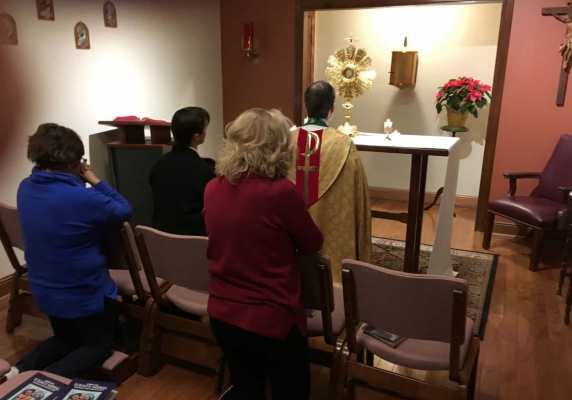 “Abortions have significantly decreased in that facility and in Missouri overall, since the opening of the convent,” said Amy Kosta, program manager at the convent. “How can that evil happen with Jesus right across the street?”

The idea for Our Lady of Guadalupe Convent originated in 2015 when a few Catholic couples in the Archdiocese of Saint Louis proposed building a chapel near the Planned Parenthood clinic. The chapel could be a place for pro-life advocates and sidewalk counselors to gather for prayer and fellowship.

They brought their idea to the then-Archbishop Robert Carlson, who has since retired. The archdiocese purchased and renovated the house, dedicating it in 2017 as a convent under the patronage of the protectress of the unborn, Our Lady of Guadalupe.

“Abortions have significantly decreased in that facility and in Missouri overall, since the opening of the convent,” said Amy Kosta, program manager at the convent. “How can that evil happen with Jesus right across the street?”

The convent is operated by the Respect Life apostolate within the Archdiocese of Saint Louis. But the daily task of welcoming sidewalk counselors and other pro-life advocates is the responsibility of the two Franciscan Sisters of Christian Charity who live there: Sisters Sue Ann Hall and Delores Vogt.

“People always say, ‘what do you do all day?’ And I say, ‘answer the doorbell.’ The doorbell dictates what we do or what’s going on,” said Hall.

The convent has a dual ministry of prayer and hospitality. It serves as a safe haven for pro-life advocates. Sidewalk counselors can come to the convent to warm themselves when there is cold weather. Those who are too intimidated to pray from the sidewalk outside of Planned Parenthood 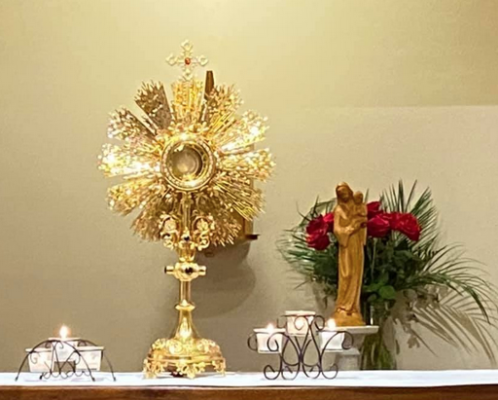 can find a quiet space in the convent’s chapel.

“We try to say, too, if there’s somebody that is afraid to come and pray in front of Planned Parenthood, they can always come to our chapel,” Hall said. “The chapel is always there. The prayer reaches there as well as out on the sidewalk.”

The convent also hosts adoration, Mass, and lunches several times a month. A meeting room on the third floor frequently accommodates the meetings of pro-life ministries in the archdiocese. The convent will also host rallies and special events surrounding national pro-life advancements, including the recent Supreme Court hearings in Dobbs v. Jackson Women’s Health Organization, a case out of Mississippi that has the potential to overturn nationwide legalized abortion.

“We had people on the sidewalk, people praying in front of the blessed sacrament and then we also had people in fellowship,” Kosta said. “So it was kind of just a revolving door that day, at least in front of our facility.”

“It’s a safe place, it’s a comfortable place and it’s just so welcoming,” she continued. “And the sisters are just a joy to work with.”

Remember: “A chocolate chip cookie and a Hail Mary”

Kosta is fairly new to her role at the convent, but she was aware of the convent and its ministry well before she took the job. She has two children who have volunteered as sidewalk counselors outside the Planned Parenthood clinic across the street from the convent.

“It’s not a place that a lot of people wanna go, especially by themselves,” she said, adding that the clinic is located in a semi-industrial area on the edge of a neighborhood. “When the convent was established, I was thrilled because I had a young daughter in her early twenties standing outside of Planned Parenthood counseling with nowhere to go as a safe place.”

Before the convent, sidewalk counselors would frequently walk to a nearby restaurant if they needed a bathroom. Now, they can walk across the street for a bathroom, a chapel and—  if they are lucky— the sisters’ chocolate chip cookies.

Many times the sisters will be reintroduced to pro-life advocates at other events in the archdiocese, “and they’ll say, ‘I remember those chocolate chip cookies’,” Hall said. “So in a sense it’s an icebreaker to get to know people and it encourages them to maybe want to come back again. If nothing else for a chocolate chip cookie and a Hail Mary.”

Why fear when He tells you ‘not to be afraid’?

Some days, the sisters join pro-life advocates in praying from the sidewalk outside the Planned Parenthood. The sisters said passing cars will often honk in support, but they will also get negative comments.

“In one sense, there’s a sense of ‘are we safe? Is it safe to be here? Will something happen?’,” Hall said. “So far, we’ve been very blessed.”

“I…feel this sense of God enveloping us and knowing we’re here for good and for His honor and glory,” Hall continued. “I just feel if God wants this work to be accomplished that Ge will see it accomplished. Why fear when He tells you not to be afraid?”