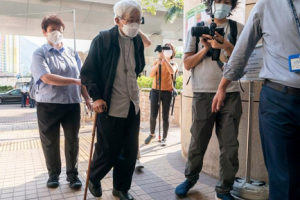 Day 2: The Trial of Cardinal Zen in Now-Communist-Ruled Hong Kong

On Tuesday, Cardinal Joseph Zen’s second day in court in Hong Kong, five witnesses were cross-examined and the magistrate ruled that there was sufficient evidence to justify a trial.

Paul Marshall, the director of the Religious Freedom Institute’s South and Southeast Asia Action Team, told CNA that Zen’s trial “further undercuts [communist] China’s 1997 promise of ‘one country, two systems’ when Hong Kong was returned to its rule and shows the government cannot be trusted to keep its agreements.”

which the Chinese government will go to crush any vestiges of dissent and free religion in Hong Kong or the mainland,” he said.

In court, Principal Magistrate Ada Yim ruled that the prosecution has sufficient evidence to make a prima facie case against the cardinal and five others for failing to properly register a fund to provide legal aid to pro-democracy protesters, according to the Hong Kong Free Press.

The Cardinal was arrested in May along with other democracy activists under Hong Kong’s strict national security law. Under the current less serious charge, he could face a fine of about $1,200 but no jail time.

Steven Mosher, president of Population Research Institute and a seasoned expert in China, notes in a recent article that Pope Francis and the Vatican do not seem to be speaking out in the Cardinal’s defense; and even appear to be more concerned about not offending the Chinese Communist Party (CCP) than in defending this faithful cardinal.

Why this may be the case is anyone’s guess.

“No Defense for Zen.“ summarizes the recent newsletter of Mosher’s Population Research Institute. “Cardinal Zen, the loudest supporter of religious freedom and the Underground Catholic Church in China, was taken to trial this week on trumped-up CCP charges. Zen, along with four trustees involved with his 612 Humanitarian Relief Fund, was arrested for not properly registering this charity (which defends pro-democracy demonstrators)…”

“Abandoned by the Vatican: Dr. Christopher Manion reported on the same issue above, the [apparent] abandonment of Cardinal Zen by the Vatican. Although Pope Francis refuses to directly address the persecution of Zen, other world leaders are not so quiet. Surprising support arose from the European Parliament, which passed a resolution condemning the arrest of Zen and his fellow trustees.”

“Cardinal Zen’s Trial: The trial followed around the world was adjourned following the prosecution’s case, after only two days (of the scheduled five). Cardinal Zen and his co-defendants pleaded not guilty but were unable to present the defense or call witnesses. They were also prevented from cross-examining the prosecution, as it was deemed “irrelevant” by Judge Ada Yim.

“The trial has been a total sham so far, with the prosecution able to present its case, but Cardinal Zen and the other defendants unable to question witnesses or present their defense,” says PRI President Steven Mosher. “The surprise postponement of the continuation of the trial until October 26 may represent an attempt by Beijing to put pressure on the Vatican.””

The Cardinal is not alone

In addition to Cardinal Zen, who has been free on bail since early May, several others have been charged for failing to apply for local society registration for the 612 Humanitarian Relief Fund between 2019 and 2021. Those accused with Zen are lawyer Margaret Ng, singer-activist Denise Ho, cultural studies scholar Hui Po-keung, activist Sze Ching-wee, and ex-legislator Cyd Ho.

All the defendants have pleaded “not guilty”. Cyd Ho is already jailed for a different charge. The fund helped pro-democracy protesters pay their legal fees until it dissolved itself in October 2021.

The legal representatives for the six defendants said that they will not testify in court or call any witnesses, but they will submit legal arguments on the interpretation of Hong Kong’s Societies Ordinance, according to the Hong Kong Free Press.

The defendants’ lawyers have previously said they had the right to associate under Hong Kong’s Basic Law — the legal framework created when Great Britain handed over Hong Kong to China in 1997.

Article culled from CNA, LifeSite News and other resources.