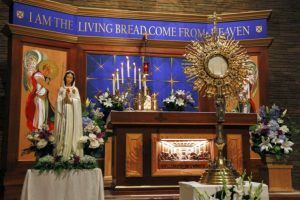 Washington D.C.-CNA—Two churches in Maryland have held days Eucharistic Adoration with prayers for healing from the recent scandals that have plagued the Church. St. Andrew Apostle Church in Silver Spring, along with Sacred Heart Church in La Plata, hosted a 24-hour “Day of Prayer: Repair My House” October 4-5.

About six weeks before the event, the pastors of the two parishes were discussing how to respond to the recent sexual abuse crisis and it effects both on them as priests and on their parishioners. According to Fr. Dan Leary, pastor at St. Andrew’s, “we both kind of came to this conclusion: repair my Church, repair my Church.”

Following that conversation, a program of events were held in the parishes centered around prayer, fasting, and adoration.

Since the outbreak of the recent scandals over the summer, many bishops, including Pope Francis, have called for the Church to collectively practice penance and fasting.

In the wake of the Pennsylvania grand jury report, the pope issued his Letter to the People of God in which he said it was “essential” that the whole Church acknowledge and respond to the wounds inflicted by the abuse crisis.

“May fasting and prayer open our ears to the hushed pain felt by children, young people and the disabled,” the Pope wrote. “A fasting that can make us hunger and thirst for justice and impel us to walk in the truth.”

Fr. Leary explained to CNA that many pastors have struggled in responding to the pain and confusion the recent scandals have caused their flocks.

“People are wounded, they don’t know who to turn to,” he told CNA.

“The answer is, of course, to turn to the Lord. The Church has the best medicines for spiritual injuries – in the sacraments and in the disciplines of prayer; these have power, real healing power.”

Leary told CNA that when the news of the scandals first broke, he held a listening session shortly afterwards with his parishioners, which he described as “very positive.” But, he said, many priests were asking themselves and each other how to move past simple listening.

“As shepherds, we have to lead, always lead, towards Christ. Many of us in the Washington archdiocese have had listening sessions, and that is such an important part – hearing the needs of the parish. But there comes a time where people want answers, not just listening, and what answer can we give?”

The answer, Leary said, lies in leading by example.

“There is so much power in prayer, and in acts of penance and reparation. These unify us with Christ in his love for the suffering Church. But we have to be the first ones, as priests, to show the way and to ask for our parishioners help, their prayers for us, so that we can serve them as they deserve to be served.”

Inspired by the tradition of St. Francis of Assisi, Fr. Leary and Fr. Lawrence Swink of Sacred Heart, hosted simultaneous days of prayer, reparation, and fasting at their two parishes on the saint’s feast day, Oct. 4.

The parishes, in the northern and southern halves of the Archdiocese of Washington, offered to serve as “poles of prayer” for the archdiocese. Parishioners and other Catholics were free to attend a Holy Hour at either parish throughout the event.

The day was focused on the Blessed Sacrament, Leary told CNA, because it is there Catholics  “will find the ultimate healing and the grace to respond to this time of pain and suffering in the Church.”

Each hour began with the Litany for Priests, composed by Cardinal Richard Cushing, to offer prayers for the ministry of priests.

Leary called the litany “very powerful” and believes it is particularly important to pray for priests during this time, and he said it has been a focus in his own parish since 2009.

He told CNA that these prayers have “borne tremendous fruit, especially the Litany for Priests,” and have been “so effective in helping people to understand the beauty, the dignity of the priesthood.”

“Otherwise, it’s just a man sitting there listening to their sins,” he said.

Leary hopes that other churches in the area will be inspired by the event and host their own versions. St. Andrew Apostle plans on hosting a 40-hour Eucharistic Adoration around the feast of St. Andrew, which is celebrated on November 30. This event will also include prayer intentions for priests.