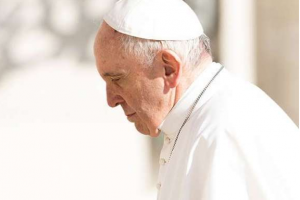 Pope Francis said on Wednesday that the dying need palliative care, not euthanasia or assisted suicide.

CNA—At his general audience in the Vatican’s Paul VI Hall on Feb. 9, the pope said that this ethical principle was valid not only for Christians but for everyone.

He expressed gratitude for palliative care, which seeks to improve the quality of life of people suffering from severe illnesses.

“However, we must be careful not to confuse this help with unacceptable drifts towards euthanasia,” he said.

Life matters: Death is not something to be “administered”

“We must accompany people towards death, but not provoke death or facilitate assisted suicide.”

He went on: “I would point out that the right to care and treatment for all must always be prioritized, so that the weakest, particularly the elderly and the sick, are never discarded. Indeed, life is a right, not death, which must be welcomed, not administered. And this ethical principle applies to everyone, not just Christians or believers.”

The pope remarks came amid growing acceptance of euthanasia and assisted suicide in Western countries, including Australia, Austria, England and Wales, Italy, Portugal, Spain, and the United States.

In September 2020, the Vatican’s doctrinal congregation reaffirmed Church teaching on the sinfulness of euthanasia and assisted suicide — a sign of Rome’s rising concern at the trend.

“We must accompany people towards death, but not provoke death or facilitate assisted suicide.” @Pontifex

Pope Francis said at his General Audience in the Vatican’s Paul VI Hall that the dying need palliative care, not euthanasia or assisted suicide. pic.twitter.com/pY54GdeqHA

The pope dedicated his live-streamed general audience to “St. Joseph, patron of the good death,” in the 11th installment in his cycle of catechesis on Jesus’ foster father, which he launched in November.

He noted that the Church has long encouraged Catholics to ask St. Joseph to intercede for the dying, citing Pope Benedict XV’s 1920 text Bonum sane.
“Dear brothers and sisters, perhaps some people think that this language and this theme are only a legacy of the past, but in reality, our relationship with death is never about the past, but always about the present,” he said.

Pope Francis recalled that in a letter published on Feb. 8, Pope emeritus Benedict XVI referred to himself as approaching “the dark door of death.” He praised his predecessor’s words for their clarity and said that they contained “good advice.”

Reality of death in a “feel good” culture

He said: “The so-called ‘feel-good’ culture tries to remove the reality of death, but the coronavirus pandemic has brought it back into focus in a dramatic way. It was terrible: death was everywhere, and so many brothers and sisters have lost loved ones without being able to be near them, and this has made death even harder to accept and process.”

The pope explained that Christianity helped believers to face death by presenting it in the light of Christ’s resurrection.

“Dear brothers and sisters, it is only through faith in resurrection that we can face the abyss of death without being overwhelmed by fear. Not only that: we can restore a positive role to death,” he said.

Death, he said, helps believers to see the troubles of daily life in perspective and shows the paramount importance of charity and sharing with others.

He then reflected on care for the dying, emphasizing that doctors must make every effort to cure the sick.

But, he said, “it is immoral to engage in futile treatment,” citing the Catechism of the Catholic Church (2278), which says that “discontinuing medical procedures that are burdensome, dangerous, extraordinary, or disproportionate to the expected outcome can be legitimate.”

He highlighted what he described as the “real problem” of “accelerating the death of the elderly.”

“Many times we see in a certain social class that the elderly, because they do not have the means, are given less medicine than they would need, and this is inhuman: this is not helping them, this is pushing them earlier towards death,” he said.

He urged the authorities not to isolate the elderly or hasten their deaths.

Concluding his address, the pope noted that in the Hail Mary prayer, Catholics ask the Virgin Mary to be close “at the hour of our death.”

“Precisely for this reason, I would like to conclude by praying together a Hail Mary for the dying and for those who are experiencing bereavement,” he said, before reciting the prayer with pilgrims.

A summary of the pope’s catechesis was read out in seven languages and he greeted members of each language group.

Addressing English-speaking Catholics, he said: “I welcome all the English-speaking pilgrims taking part in today’s audience, especially the representatives of the Global Christian Forum and the seminarians and student groups from the United States of America. Upon all of you, and your families, I invoke the joy and peace of Jesus our Lord. God bless you!”

Before offering his final greeting, to Italian speakers, Pope Francis thanked Catholics who took part in the day of prayer for peace in Ukraine on Jan. 26,

He said: “Let us continue to implore the God of peace, that tensions and threats of war may be overcome through serious dialogue, and that the talks in the ‘Normandy Format’ may also contribute to this end. Let us not forget: war is madness!”

He also looked ahead to Feb. 11, which marks the World Day of the Sick.

“I would like to remember our dear sick people so that all may be assured of health care and spiritual accompaniment,” he said.

“Let us pray for these brothers and sisters of ours, for their families, for health and pastoral workers, and for all those who care for them.”