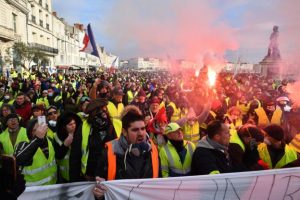 France Protests One Reality of Socialism, but there’s more under the surface

As Margaret Thatcher, former Prime Minister of England once noted, “The trouble with Socialism is that eventually you run out of other people’s money.”  Unfortunately France didn’t get the message prior to voting for president in 2017.  It’s unclear if they get the message now.  But whether or not the French connect the dots between their 2017-elected president Emmanuel Macron and his Socialist principles, they clearly don’t like his mandate for more taxes (needed to cover the costs of “free” government benefits).

The massive, ongoing and widespread protests in France began November 17, 2017, in response to Macron’s mandated increase in already-high fuel taxes.  Dubbed the Yellow Jackets because of the yellow vests worn by many participants, the protests are now in their eighth week. Initially Macron delayed the implementation of these taxes for six months, but that deadline rapidly approaches and the protests continue.

Increased taxes hit everyone in the checkbook. The pain can’t be ignored. But what other policies have been and will be implemented under Socialist-leaning directives? Those things may be even more freedom-restricting for French citizens, and even more devastating because the pain they will cause is not so immediate.

A lesson for all of us, regardless of which country in which we live.  Socialism is a stifler of human potential, freedom and peace.