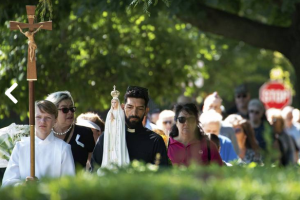 A Catholic priest, Fr. Hernan Cuevas, is being praised for taking immediate action as soon as he heard the shots ring out during the deadly Highland Park parade shooting on July 4th.  The priest is featured in the cover photo as he leads parishioners in a public memorial event a few days later.

According to a timeline from the New York Post, the gunman settled himself in a spot on top of a building on the parade route. The man,, identified as Robert “Bobby” Crimo III, opened fire on the the crowd about 10 minutes after the parade began. Crimo fired off a total of 83 shots, killing seven, with an additional 46 wounded by gunfire or injured as they fled.


Amid the chaos that ensued, Father Cuevas took quick action to shelter his parishioners and anyone nearby.

On the morning of the parade, Fr. Cuevas was with parishioners of the United Parish of Immaculate Conception and St. James as they attended to the joint parishes’ parade float. There was great excitement in the air and he was taking a video of last-minute preparations and the parade float itself.  It was then that he heard the first gunshots, he explained to CBS,

The priest turned to his parishioners and immediately told them to “Run! Run! Run!”

He said that a group of around 50 people, some parishioners and some strangers, flocked into Immaculate Conception church, where Fr. Cuevas sheltered them in the sanctuary. Turning to prayer, the priest took out his Rosary beads and began praying the Hail Mary. He told CBS News, “I knew our lives were in God’s hands.”

Among those who streamed into the church during the confusion were two small children who had been separated from their parents. Fr. Cuevas noted that the children had blood on their clothing because their father had been shot.

“The first thing was taking care of the blood that was on their shirts and kind of taking away the kind of trauma of whatever was going on with them,” recounted Fr. Cuevas in the interview. “You could tell by looking at their eyes, they were like lost.”

Fr. Cuevas took care of the children for nearly four hours while they hid from the shooting. Eventually a woman frantically entered the church looking for her two lost children.

“We knew that she was the mom of the kids that we were here with, and we just hugged each other, and we just were crying,” Cuevas said, adding “We hope and pray we don’t have to go through this again.”