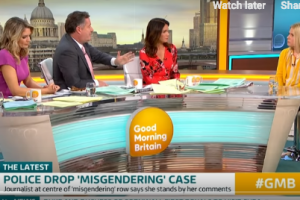 Can’t Make This Up: Catholic Journalist in Britain targeted for allegedly “misgendering” (the truth is jaw-dropping, unimaginable)

Imagine reading in history books that there was a once a civilization in which mothers would castrate their teenage sons in the name of transgender identity, would be praised for imposing such a permanent, life-altering action on their child, and would publicly share details of the entire ordeal and promote its benefits.

Just a few years ago, most people would call such action grievous child abuse.

But today, most recently in Britain, a clear-headed Catholic journalist and broadcaster was accused and investigated by police who arrived unannounced, banging on her door, for doing nothing more than having responded to the public tweets and sharings of another mother who proudly proclaimed (and detailed) castrating her teen son because she deemed him to be a trans gender person.  He was only 16 years old!

Faithwire—British police have announced that they will be dropping their investigation into a Catholic journalist who was shocked to be contacted by authorities after allegedly “misgendering” a trans child on Twitter. Caroline Farrow took to Twitter after Surrey Police notified her that they had opened an inquiry into an allegation of “misgendering” after Farrow appeared on a British talk show and debated with a trans activist, Susie Green.

Surrey Police said they followed up the complaint because they had a “duty of care to fully investigate all allegations which are reported to us,” according to Christian Today. “The original allegation has subsequently been withdrawn and no further action will be taken in relation to this matter.”

Farrow talked about her ordeal on “Good Morning Britain,” noting that, when the police knocked on her door and informed her she would be investigated over the tweet, she was “terrified and shaking.”

“I couldn’t breathe,” she said. “I thought, ‘they are going to try and make a test case out of this one.’”

What is the background?

Caroline Farrow was contacted by authorities after her appearance on “Good Morning Britain,” in which she… Read More>>