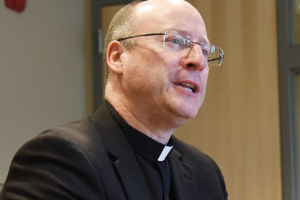 Bishop ‘could not keep silent’

News Tribune—Bishop W. Shawn McKnight of the Diocese of Jefferson City — one of the youngest and newest of those attending the U.S. Conference of Catholic Bishops — was among the first and loudest to respond when the Vatican asked the conference to delay action on the sexual abuse crisis facing the church.

Many were surprised. Maybe none more so than McKnight.

“I made the promise to myself that I would not speak at my first major general assembly out of deference. You’re the new guy, and you need to learn how this crisis works,” McKnight said Monday. “But, when this crisis blew up and the November assembly was focused primarily on addressing it. The way this was happening, I could not keep silent, no matter how young I am.”

The U.S. bishops meet annually to promote the greater good the church can do for humankind, according to the conference website, and fits programs to circumstances as required. The agenda going into this year’s conference in Baltimore was to create a strategy to deal with the growing clergy sexual abuse crisis across the country.

McKnight recognized early last week (when the conference started) that he was frustrated, and perhaps a little angry that certain former bishops were at the conference.

Among them was James Timlin, who had been named in a Pennsylvania grand jury report. When Timlin served as bishop in Scranton, Pennsylvania, he reassigned a priest who had raped a girl and arranged for the church to pay her family $75,000 to remain silent. He resigned as bishop in 2003, when he turned 75, the age of mandatory retirement.

McKnight said he was disturbed Cardinal Roger Mahoney, who is barred from public ministry because he systematically covered up clergy abuse, spoke during the conference.

Since his ordination in February, McKnight has been working to address community concerns about sexual abuse, which he said tests the faith of the people.

Revelations about Cardinal Archbishop Theodore McCarrick, the former archbishop of Washington, D.C., who was suspended in July over allegations he sexually abused seminary students and later retired, demonstrated an egregious abuse of power, McKnight said. Less than a month later, in August, a Pennsylvania grand jury released a report on clergy abuse.

Shortly thereafter, while following the lead of the Diocese of St. Louis, he added the Diocese of Jefferson City to an independent investigation into potential sexual abuse that Missouri Attorney General Josh Hawley’s office is …Read More>>