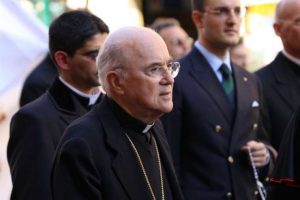 Entitled “Scio Cui credidi,“ (“I know in whom I have believed”), the Archbishop notes the reference to 2 Timothy 1:12 which reads: “For this reason, even though I suffer as I do, I am not ashamed; for I know whom I have believed, and I am convinced that He is able to guard what I have entrusted to Him for that day.”

He calls himself a witness “of shocking facts,” and says he believed that very grave harm could be avoided “only by divulging the truth.”

“Neither the pope, nor any of the cardinals in Rome have denied the facts I asserted in my testimony,” the archbishop notes.  Referring to the proverb “silence is consent,” he says that “if they deny my testimony, they have only to say so, and provide documentation to support that denial.”

“How can one avoid concluding that the reason they do not provide the documentation is that they know it confirms my testimony?”

Archbishop Viganò notes that Pope Francis’ response to his testimony was, “I will not say a word,” though “he has compared his silence to that of Jesus in Nazareth and before Pilate, and compared me to the great accuser, Satan, who sows scandal and division in the Church — though without ever uttering my name.”

The former nuncio charges that rather than simply saying, “Viganò lied”, the pope has “put in place a subtle slander against me — slander being an offense he has often compared to the gravity of murder.”

“The pope’s unwillingness to respond to my charges and his deafness to the appeals by the faithful for accountability are hardly consistent with his calls for transparency and bridge building,” Archbishop Viganò asserts.

He continues, saying that “the pope’s cover-up of McCarrick was clearly not an isolated mistake,” noting that Francis “has defended homosexual clergy who committed serious sexual abuses against minors or adults.” He gives as examples Fr. Julio Grassi, Fr. Mauro Inzoli, “and his halting of the investigation of sex abuse allegations against Cardinal Cormac Murphy O’Connor.”

Archbishop Viganò calls on Cardinal Daniel DiNardo of Galveston-Houston and the other American bishops who met with Francis Sept. 13 to state whether the pope refused “to carry out a Vatican investigation into McCarrick’s crimes and of those responsible for covering them up,” saying that “the faithful deserve to know.”

He also appeals to Cardinal Marc Ouellet, prefect of the Congregation for Bishops.

Archbishop Viganò said that Cardinal Ouellet “had maintained his dignity … at the beginning of Pope Francis’ pontificate.”

“Later, however, when his work as prefect of the Congregation for Bishops was being undermined because recommendations for episcopal appointments were being passed directly to Pope Francis by two homosexual ‘friends’ of his dicastery, bypassing the Cardinal, he gave up. His long article in L’Osservatore Romano, in which he came out in favor of the more controversial aspects of Amoris Laetitia, represents his surrender.”

Addressing Cardinal Ouellet, he says: “before I left for Washington, you were the one who told me of Pope Benedict’s sanctions on McCarrick. You have at your complete disposal key documents incriminating McCarrick and many in the curia for their cover-ups. Your Eminence, I urge you to bear witness to the truth.”

Archbishop Viganò closed his letter by encouraging the faithful to “never be despondent” and to have faith and complete confidence in Christ.

“This is a time of repentance, of conversion, of prayers, of grace, to prepare the Church, the bride of the Lamb, ready to fight and win with Mary the battle against the old dragon,” he says.

Referring to an image of the calming of the storm from St. Mark’s Basilica in Venice, which shows Christ both in the boat asleep, with Peter trying to wake him, and also standing behind the apostles and in command of the boat.

“The scene is very timely in portraying the tremendous storm the Church is passing through in this moment,” Archbishop Viganò says, “but with a substantial difference: the successor of Peter not only fails to see the Lord in full control of the boat, it seems he does not even intend to awaken Jesus asleep in the bow.”

“Has Christ perhaps become invisible to his vicar? Perhaps is he being tempted to try to act as a substitute of our only Master and Lord?”

“The Lord is in full control of the boat,” he concluds. “May Christ, the Truth, always be the light on our way!”  Read Archbishop Vigano’s second letter here>>

Portions of this article were culled from CUA/EWTN News with permission.