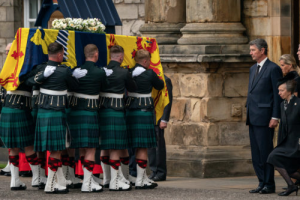 Will You Curtsy to the Queen?

Crisis—With the passing of Queen Elizabeth, several parallels to our Faith emerged. Here was deceased royalty brought to bear on a grieving nation, and all of the pomp and circumstance, along with the throngs of people along the route of the hearse, brought to mind both our King, Jesus Christ, and His Mother, the Queen of Heaven.

One particular act of humility brought that further to mind.

In one widely reported, powerful moment, Princess Anne, the late Queen’s daughter, curtsied to her mother’s casket as it proceeded along the road. It was a simple but most profound gesture of respect and, one might say, servility to the power of the throne upon which Queen Elizabeth sat for over seventy years. Yet, it spoke of mystery, too.

Here was a vehicle carrying a draped casket, which everyone along that passageway was convinced held the United Kingdom’s deceased monarch. No questions asked; no doubt raised. Thousands pressed tightly together, displaying various signs of homage, believing it was the earthly remains of the Queen that was passing by them. They accepted that as fact. Even Princess Anne, obviously, held the same faith in that assertion. So many gaped wondrously; they wept; they waved; they bowed heads; they paid the Queen honor by their confidence in her presence, even at a distance.

This morning, during Mass, as I looked forward at the tabernacle, it struck me that every day, in tens of thousands of Catholic Churches and chapels, the eternal King of the Universe is present. Moreover, He is alive, Body, Blood, Soul, and Divinity. We … read more>>