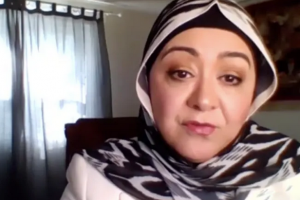 Uyghur journalist: “The Chinese government sees any religion as a threat to its rule” including Catholics

CNA—For Gulchehra Hoja, the Chinese government’s systematic repression of Uyghur Muslims is personal: her mother, father, brother, and more than 20 relatives are detained in “reeducation camps” in Xinjiang.

“Last week, I learned that one of my relatives … had died in Chinese prison. His body has not been returned to his family,” Hoja said May 11 at a virtual event hosted by the U.S. embassy to the Vatican.

He was a “59-year-old father of three children, taken to the camp in 2017, and later sentenced to 19 years in prison just for studying religion,” she said.

Hoja, originally from China’s northwest Xinjiang region, has been working as a journalist for Radio Free Asia’s Uyghur Service for nearly 20 years.

She shared what she has witnessed at the event, “Human Rights in China: Uyghurs and Religious Minorities,” hosted by the U.S. Embassy to the Holy See.

“The Chinese government has established a list of criteria by which the authorities would deem someone as extremist, just to name a few: growing a beard, wearing a headscarf or long dress, keeping religious books at home, naming your child with Islamic name, as Mohamed. Just having one of those criteria applied to you is enough to be sent to camps,” she said.

“Unfortunately, the Chinese government sees any religion as a threat to its rule,” she added.

The Chinese Communist Party government has detained more than a million predominantly Muslim Uyghurs in internment camps in Xinjiang, where detainees have faced torture, forced labor, and death, according to the U.S. Department of State.

A report from the Australian Strategic Policy Institute found that more than 15,000 mosques have been damaged or demolished in the region since 2018, and an AP investigation found a systematic campaign by the Chinese Communist Party of pregnancy checks and forced abortions, sterilizations, and implantations of IUDs on Uyghurs and other minorities in Xinjiang.

Rachel Harris, a professor at the University of London whose research has focused on Uyghur culture and religious practice, said at the event that she was worried that this “vibrant religious culture” is being “systematically destroyed.”

After she had conducted research in Xinjiang for more than a decade, Harris’ access to the region was cut off in 2012 when the Chinese government began refusing her visas. She said this was “presumably because of the sensitive nature of my research on Islam.”

“I have to assume that many of the women I know and their families have been incarcerated in these camps, and that likely they’ve been more recently drawn into the system of forced labor in the factories which now receive so-called ‘graduates’ from the camps,” she said.

“As well as my concerns for those women’s safety and well-being, I’m also concerned that their vibrant religious culture has been systematically destroyed, and that it will never revive in the form that I knew it.”

Harris explained that the Chinese government’s ongoing oppression of Uyghur ethnic minority has been “consistently masked by this rhetoric of terrorism.”

“But actually what we see is a much more widespread campaign against the daily practice of religion.”

“In May 2014, Xi Jinping himself instigated what he called a People’s War on Terror. Uyghur passports were confiscated, the ties with the outside world were cut off, a tight net of surveillance tracked people’s every movements, and construction began on the system of mass internment camps,” she said.

“And it is very important to know that this war did not target those who might be reasonably assumed prone to extremist violence. This was really about the wholesale criminalization of religious practice, and so we’ve seen numerous government documents talking, for example, about the 75 types of behavior that demonstrate religious extremism.”

No Vatican representatives spoke at the Rome-based virtual event hosted by the U.S. Embassy to the Holy See.

The Vatican Secretariat of State has not spoken publicly on the issue of the detention of Uyghurs in China. The Holy See signed in 2018 and then renewed in 2020 a two-year provisional agreement with the Chinese government, the contents of which have not been made public.

Pope Francis described the Uyghurs as a persecuted people in a book published last year. The Chinese foreign ministry responded by saying that the claim was groundless.

Patrick Connell, the U.S. embassy’s chargé d’affaires, said that “public acknowledgement of the egregious human rights abuses in China is an important step toward holding the Chinese government accountable.”

He noted in his opening remarks that Catholics in China have also faced severe restrictions in their right to worship.

“The new law requires members of the clergy to prove that they ‘support the leadership of the Chinese Communist Party and support the socialist system.’”

Religion absolutely prohibited, regardless of rhetoric

The U.S. diplomat pointed out that under the current restrictions, anyone in China “under the age of 18 is prohibited from participating in religious activities, including attending Mass or praying in a mosque.”

“Members of Catholic communities in China face other severe restrictions and limitations on their right to worship freely, with reports of government officials forcibly closing hundreds of churches, arresting Catholic bishops, priests, and nuns, and even forbidding them from engaging in any religious activity in their capacity as clergy. There’s pressure on schools to check up on the religious beliefs of their students and staff,” he said.

“Some have called this the worst crackdown on religion since the Cultural Revolution.”

Consequences of being a “Tall Poppy” and speaking out

Harri Uyghur, a human rights activist from China, was unable to speak at the event out of concern for his family’s safety. He asked instead for a note to be read at the event.

“I stand up for the human rights of people in China, particularly in Xinjiang. I have been contributing to the belief that all human beings are created equal. And what the Chinese government is committing in Xinjiang is not something normal human beings, including Chinese people, can ignore, nor stand aside from. The Chinese Communist Party should stop it immediately,” he wrote.

“I want to contribute for the good of the human rights of people in Xinjiang, but not at the cost of my parents or my family’s life, or their safety and well-being. I have done as much as I can. And I believe I can do more, but I really need to take a break, at least for now until my parents’ and in-laws’ safety and well-being is guaranteed.”