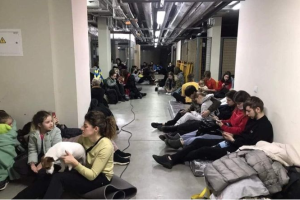 Father Bogdan Prach, the rector of the Catholic university, appealed for support from the global academic community as Russian troops advanced on Ukraine’s capital, Kyiv, about 300 miles to the east.

“Despite the harsh circumstances and no matter how great the challenges stemming from today’s world crisis, our spirit remains strong, and together with the help of our Lord, strong Ukrainian army, and inexhaustible global academic support, we are incomparably stronger to defeat the evil that rebelled against humanity.”

The Ukrainian Catholic University was the first Catholic university to open in the territory of the former Soviet Union. John Paul II blessed the institution’s cornerstone during his visit to Ukraine in June 2001.

The school has about 1,900 students and is affiliated with the Ukrainian Greek Catholic Church, the largest of the 23 Eastern Catholic Churches in communion with Rome. Major Archbishop Sviatoslav Shevchuk serves as the university’s chancellor.

With Russia’s invasion of Ukraine, the university has made all classes remote and given students the option to remain living on campus or return to their families.

On the morning of Feb. 25, Ukrainian Catholic University students huddled together in a shelter after authorities sounded air raid sirens encouraging residents of Lviv to seek safety below ground, according to a post from the university’s official social media account.

Lviv is a city in western Ukraine about 40 miles from the border with Poland. For the past two days, air raid sirens have sounded in Lviv each morning.

The Ukrainian city, closer to the Polish city of Kraków than Kyiv, is currently considered a safe zone with many refugees entering the city from other parts of Ukraine.

Around 200 diplomats, including representatives of the United States, moved from Kyiv to Lviv last week as tensions with Russia mounted. The U.S. embassy has since relocated its staff to Poland.

“Now, more than ever, we need the support of the entire global academic community,” Prach said.

“It will be extremely helpful for us if you approach your governments with institutional and/or individual appeals to support Ukraine with military, economic, and humanitarian assistance and to impose devastating sanctions against Russia. Remaining silent and apathetic are the greatest enemies right now.”

The Catholic Universities Partnership also issued a statement condemning “the invasion as a gross violation of international law and as a disrespect of standards of decent human morality.”

Sophia Opatska, the founding dean of the Ukrainian Catholic University’s business school, recorded a video with suggestions on how businesses and citizens of other countries can support Ukraine.

Opatska recommended that business organizations “stop all relations with Russian businesses and companies,” particularly cutting off Russia from SWIFT payments.

She also encouraged people to put pressure on governments to enact a no-fly zone over Ukraine to protect civilians from Russian jets, drones, and missiles.

Myroslav Marynovych, the vice-rector of the Ukrainian Catholic University, was a recipient of the Napa Institute’s Charles J. Chaput Award. He spent seven years in a Soviet gulag in the Perm region of Russia from 1977 to 1984.

In an interview with CNA in 2018, Marynovych said that in the labor camp he learned “what ‘love your enemy’ really means.”

Marynovych was among 120 signatories on an appeal to the president of the Council of the European Union on Feb. 19 calling for immediate “negotiations on Ukraine’s accession to the European Union, with the aim of its full integration within 10 years.”

Pope Francis has appealed for a worldwide day of prayer and fasting for peace on Ash Wednesday, March 2.

“This war has been going on for the last eight years, but today, Ukraine and the whole world face the greatest danger since 2014,” Prach said.