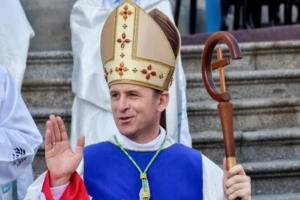 ACN, CNA—According to Aid to the Church in Need (ACN), a Ukrainian Catholic bishop is sheltering with his Orthodox counterpart in the besieged city of Kharkiv.

ACN reported on Feb. 28 that Bishop Pavlo Honcharuk (featured in photo), the Latin Rite bishop of Kharkiv-Zaporizhia, had “spent the past days in a bunker with several families, as well as with his Orthodox counterpart.”

Russian forces have advanced on Kharkiv, which has a population of 1.4 million people, since President Vladimir Putin ordered a full-scale invasion of Ukraine on Feb. 24.

According to media reports, the Russian bombardment of the city in northeastern Ukraine has resulted in the deaths of civilians, including children.

ACN said that it had received a message from Honcharuk, a 44-year-old who was appointed a bishop by Pope Francis in January 2020.

He said: “I wish for this war to end as quickly as possible. But while evil has shown itself to be so strong, this has also exposed a lot of good. In a way, the evil we are experiencing also squeezes the good juice from the grape, and that good juice is our compassion, mutual support, and love. It shows our true faces.”

“My message is short because we are under constant bombardment, and I am a little nervous, but we try to act normally. God bless you!”

Kharkiv is the second-largest city in Ukraine after the capital, Kyiv. The Latin Rite Diocese of Kharkiv-Zaporizhzhia was created in 2002 and is centered on the Cathedral of the Assumption of the Blessed Virgin Mary in Kharkiv. It is a suffragan diocese of the Archdiocese of Lviv of the Latins in western Ukraine.

ACN, a pontifical foundation established in 1947, is sending $1 million in emergency support to Catholics in Ukraine.

Expressing his gratitude to the charity, Honcharuk said: “We are really surprised and very grateful for the mobilization of so many people, not only all over Ukraine, but also abroad.”

“I would like to especially thank the donors who, through ACN, fulfill their calling to show mercy and love. I sincerely thank you all, the whole of the ACN team, all employees, volunteers, and donors.”