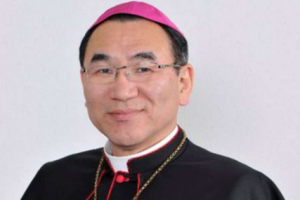 Tokyo archbishop: It is ‘difficult to find success’ on evangelization in Japan, but there are pockets of great hope

CNA—Efforts by the Catholic Church to evangelize the Japanese population have frequently collided with roadblocks, according to Archbishop of Tokyo Isao Kikuchi, but the Church is still finding some ways to proclaim the Gospel.

The archbishop answered question from Catholic News Agency on Japan, evangelization, and why breaking through into mainstream Japanese society is so difficult for a religion that has survived persecution and genocide in the country since 1549.

“In Japanese society, it is difficult to find tangible success in missionary activities.”

“In the past, foreign missionaries succeeded in opening classrooms, gathering the people through English and cultural classes. However, these have been replaced by the initiatives of business enterprises.”

Foreign language education proved to be a powerful tool for cross-cultural pollination after World War II. It was demanded for high-paying positions in international business and politics, and only natively spoken by a fraction of a percentage of the population.

However, English education has since become compulsory in most schools. English classes often start at first grade or even earlier and continue through high school.

Eikaiwa are staffed with foreigners, taught cheaply, and often stick to approved conversations and lessons. Their wages are not high, and they can be quite expensive for customers. There have been multiple scandals in Japan regarding national chains of eikaiwa withholding wages, cancelling contracts without notice, and generally mistreating their employees.

Combined with the increase in mandatory English education, eikaiwa have largely killed the community, amateur foreign language class, once a staple of Catholic missionary activity.

According to the archbishop, the country’s nominally Catholic schools are beginning to abandon the idea of cultural education through language instruction.

“Catholic school may be the place to meet many young people, but unfortunately, except for some, it has not become a place for missionary activities,” said Archbishop Kikuchi.

Schools have historically been seen as Catholicism’s last strong foothold in evangelizing to the Japanese. While parishes shrink with the rest of the population and clergy shortages are becoming more and more of a problem, the prestige of the Catholic high school and Catholic university have endured and even strengthened in Japan since as far back as the Meiji Reformation.

Once highly-regarded for their access to Western-style education and foreign-born instructors in a time that the country was just beginning to interact with the outside world, Catholic universities are still greatly respected today.

Sophia University is known as one of the best private universities in the nation, one of a handful of institutions that rival the National Universities, Japan’s equivalent to the Ivy League.

However, Archbishop Kikuchi says that this ongoing prestige has come with a hefty cost.

“While the schools should be independent from national politics, unfortunately they are tied up with subsidies from the country, and thus they are gradually losing their uniqueness, with only the name ‘Catholic’ remaining,” he said.

“Many priests, religious and the laity are completely losing their involvement with them.”

The Church in Japan has also spent time in recent years engaged in disaster relief projects.

“Immediately after the Great East Japan Earthquake on 11th March 2011, support activities by the Church which continues to date through the eight volunteer centers set up in the affected areas, has been widely accepted, and serve as a witness to the Gospel through works of mercy.”

Through these efforts, the archbishop says, “the Church gives priority to witnessing the Gospel in a visible way through these steadfast works of mercy. Certainly, these activities may not lead immediately to the reception of baptism, but there is hope that many people who were touched by the spirit of the Gospel would actually be led to the Church.”

Catholics from abroad, especially from the Philippines, bring and live powerful witness

The second most powerful evangelization tool, Kikuchi says, is the Catholics population that have come and made their lives in Japan from abroad.

“Secondly, the Gospel is preached through the presence of Catholics from abroad who have come to Japan. In particular, those who have settled in marriage and built their homes in the rural areas make it possible for the Gospel to be brought in areas where the Church had never had an opportunity to get involved.”

Immigrants from the Philippines make up a large portion of the incoming foreigners in recent years. Filipinos are being tapped for jobs as English educators in eikaiwa, kindergartens, assistant-teaching positions, and more.

They are the fourth largest foreign community in Japan. It is estimated that close to 250,000 Filipinos live and work across Japan.

The Philippines’ population is close to 90% Christian – 86% is specifically Catholic.

Filipinos and their families make up large portions of the laity in Japan, attending masses and integrating into religious communities in both rural and urban areas.

“Therefore, an important task that must be given priority is to encourage foreign nationals who have settled in Japan to become aware of their missionary vocation as Catholics.”

Kikuchi believes it’s up to the clergy to instill in foreigners this sense of missionary spirituality.

“Pastoral care for foreign nationals in the Japanese church is not merely a service to welcome [guests], but rather a duty to make them aware of their vocation as missionaries.”