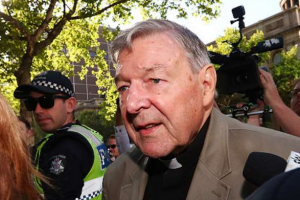 ‘Prayer has been the great source of strength to me’: Cardinal Pell acquitted, looks forward to Easter

CNA—After more than 14 months in prison, Cardinal George Pell said he was always hopeful about the High Court decision which acquitted him of all charges and released him from incarceration on April 7.

Shortly after his release from prison, the cardinal told CNA that, while he had kept faith he would be eventually exonerated, he tried not to be “too optimistic.”

On Tuesday morning, the High Court issued its decision, granting Cardinal Pell’s request for special leave to appeal, quashing his convictions for sexual abuse, and ordering that he be acquitted of all charges.

As the decision was announced by the court, several hundred miles away the cardinal watched from his cell in HM Prison Barwon, southwest of Melbourne.

“I was watching the television news in my cell when the news came through,” Pell told CNA, in an exclusive interview shortly after his release on Tuesday.

When Cardinal Pell first heard the news of his acquittal

“First, I heard that leave was granted and then that the convictions were quashed. I thought, ‘Well that’s great. I’m delighted.’”

“Of course, there was no one to talk to about it until my legal team arrived,” Pell said.

“However, I did hear a great cheer from somewhere within the jail and then the three other inmates near me made it clear they were delighted for me.”

After his release, Pell said he spent the afternoon at a quiet location in Melbourne, and enjoyed a steak for his first “free” meal in more than 400 days.

“What I am really looking forward to is celebrating a private Mass,” Pell told CNA before he had the opportunity to do so. “It has been a very long time, so that is a great blessing.”

The cardinal told CNA that he had lived his time in prison as a “long retreat,” and a time for reflection, writing, and, above all, prayer.

“Prayer has been the great source of strength to me throughout these times, including the prayers of others, and I am incredibly grateful to all those people who have prayed for me and helped me during this really challenging time.”

The cardinal said the number of letters and cards he had received from people both in Australia and from overseas was “quite overwhelming.”

“I really do want to thank them most sincerely.”

“I hold no ill will,” looking forward to Easter Triduum and Mass

In a public statement at the time of his release, Pell offered his solidarity with victims of sexual abuse.

The cardinal told CNA on Tuesday that as he readjusts to his life as a free man and prepares for Holy Week, he is focused on what lies ahead, especially Easter, and not behind.

“At this stage I don’t want to comment further on the last few years, only to say I have always said I am innocent of any such crimes,” he said.

“Holy Week is obviously the most important time in our Church, so I am especially pleased this decision came when it did. The Easter Triduum, so central to our faith, will be even more special for me this year.”