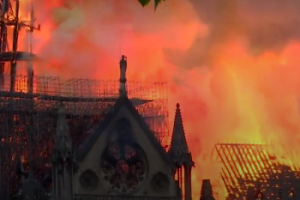 Notre Dame receives $1 billion in donations to rebuild, less than 48 hours after disaster

Mass had begun when the fire broke out in the Cathedral of Notre Dame in Paris.  Fire fighters and parish staff evacuated mass attendees immediately, even as more fire fighters were rushing to the scene.  In all, 400 fire fighters battled the inferno.  Many moveable artifacts were saved but the iconic spire, the roof and at least one stained glass Rose Window is in shambles, not to mention the stench of burned wood and piles of debris on the altar, pews and floor of the great cathedral. Parishioners and visitors alike will be attending church elsewhere during Holy Week.  The unimaginable tragedy — the cause of which is being investigated by 50 experts — took place just days ago, at the beginning of the holiest week of the year for Catholics and other Christians.  Prime Minister Marcon pledged to rebuild the structure in five years (would he be the one in charge, or would it rather fall to the Catholic Church to rebuild?!!).

A GoFundMe donation bucket was launched.  And now, less than 48 hours after the last ember died, more than $1 Billion has been donated from people around the world!

Global News—Bells will toll at cathedrals around France on Wednesday evening in honour of the monument. Remarkably, no one was killed in the fire, Macron’s 5-year deadline – which happens to coincide with the 2024 Paris Olympics, which the government wants to make a major showcase – struck many as unrealistic.

Pierluigi Pericolo, in charge of restoration and security at the St. Donatian basilica in Nantes, said it could take two to five years just to secure Notre Dame, given its size.

“It’s a fundamental step, and very complex, because it’s difficult to send workers into a monument whose vaulted ceilings are swollen with water,” he said on France-Info. “The end of the fire doesn’t mean the edifice is totally saved. The stone can deteriorate when it is exposed to high temperatures and change its mineral composition and fracture inside.”

Some 30 people have already been questioned in the investigation, which the Paris prosecutor warned would be “long and complex.” Among those questioned are workers at the five construction companies involved in work renovating the church spire and roof that had been under way when the fire broke out.

A plan to safeguard the masterpieces and relics was quickly put into action after the fire broke out.

Among the historic treasures saved from the Cathedral:

The Crown of Thorns, regarded as Notre Dame’s most sacred relic, was among the treasures quickly transported after the fire broke out, authorities said. Brought to Paris by King Louis IX in the 13th century, it is purported to have been pressed onto Christ’s head during the crucifixion.

The cathedral’s famous 18th-century organ that boasts more than 8,000 pipes also survived. Some of the paintings and other art works are being dehumidified, protected and eventually restored at the Louvre.