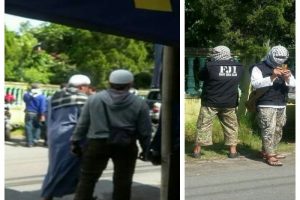 Earlier this year, but not an isolated incident, the ongoing persecution of Catholic and other Christians who try to alleviate the suffering of others, in Indonesia, regardless of religion, demands our ongoing prayers. The following news story captures the reality of the situation well.

Jakarta (AsiaNews) – Groups of hard-line Muslims have been protesting the charity work of St Paul’s Pringgolayan, a Catholic community in Banguntapan, a suburb of Yogyakarta (Central Java), claiming that they are engaged in “covert proselytising”. The charitable work is intended to mark the construction of a church for a new parish in Bantul Regency.

On 27 December, (2017) Mgr Robertus Rubiyatmoko, archbishop of Semarang, led the ceremony marking the establishment of the newly ecclesiastical circumscription.

The Catholic presence in the village on the outskirts of Yogyakarta dates back to 1974. At that time, a priest from the central parish of St. Joseph’s Bintaran would celebrate Mass in the homes of the faithful, people like Mr Sukirdjo and Francis Xavier Sardjono.

In 1979, with the full support of the late Card Justinus Darmojuwono, then archbishop of Semarang, the administrator of the Bintaran church bought land.

Between 1980 and 1983, the Catholic community engaged in a major fundraising drive that led to the construction of a first modest chapel, which was inaugurated on 25 January 1986.

Plan to expand the compound were slowed down by a major earthquake that hit the ​​Yogyakarta area in 2006.

In the following years, work resumed and last December the local community saw the birth of its parish.

To mark the event, Catholics in Banguntapan under took various charity initiatives for surrounding villages.

These activities, which embody the Church’s commitment to and compassion for the most unfortunate among local residents, consist of the gift of basic necessities and free medical check-ups.

However, this was met with the firm opposition by some hard-line Muslim groups who do not want Catholics to be involved in areas where the majority of the population is Muslim.

Last Sunday, Muslim extremists organised protests in Banguntapan (picture 1) to exclude Catholics from the locations where the latter had planned to carry out their initiatives. Ominous gatherings were also held in Jaranan, where other beneficial projects had been planned.

Islamic extremists accuse Catholics of carrying out “covert operations” to proselytise in Muslim villages. The local Islamist group Darrohman, which belongs to the Front Jihad Islam (FJI), told Catholics to do their charity works in the parish compound, not in residential areas.