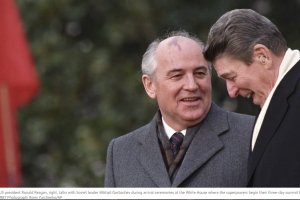 Gorbachev and Reagan: the capitalist and communist who helped end the cold war

Editor’s note — With news of Mikhail Gorbachev’s death, memories of the remarkable, historic actions of then-U.S. President Reagan, Russia’s leader at the time, Gorbachev, and England’s Margaret Thatcher come to mind…. especially the unlikely connection and even a level of friendship between Reagan and Gorbachev.

For those living in Soviet Russia at the time, the end of the Cold War ultimately ushered in a rush of fresh air, a hint of freedom, freedom to worship, but it did not happen overnight.  It was not easy.  There was no trust.  People under communist rule live in fear, how else could the few control the many?

Few, except those who lived there, could understand the profound difference these changes made in daily life. Not all at once, but over time.

It later led to the independence of so many captive countries who had been forced for many years to bend to the communist rule, to limited access to everyday items, food, commodities we take for granted in the U.S… and worse, such as no public worship allowed, stunningly beautiful Russian churches turned into museums or put to other uses.

The USSR (Union of Soviet Socialist Republics) had swallowed up Poland, East Germany, and so, so many other independent countries.  Gorbachev’s decision to be open to conversation with the United States, with President Reagan, and Reagan’s focused clarity about our principles and what mattered most for human freedom to thrive, ultimately led restoration of independence to those countries held captive by the Soviet communist regime.

In East Germany alone—half of a country had been brutally divided with a wall that was intensely guarded by East German soldiers… a country in which families had been literally torn apart, East and West, and never allowed to see each other.  From August 13,1961, until November 9, 1989, East Berlin had been separated from West Berlin by the Berlin Wall.

When Reagan declared “Tear down that wall!” the German citizens couldn’t tear it down fast enough!

Imagine suddenly being able to see your family and friends who lived on the other side, isolated, forced to live a fear-laden, scarce existence. … Prayer and Gorbachev’s openness to change and openness to have fruitful discussion with Reagan made that possible.

Gorbachev’s openness to change was miraculous in the eyes of most. As it turned out, the right leaders were in the right place at the right time it seems.

As an article from the Reason Foundation put it,

freedom-seeking among hundreds of millions of captive peoples, quickly overwhelming any one man’s (or regime’s) ability to control it.

And during most—though definitely not all—key moments of potential armed conflict between dictatorial hardliners and outgunned revolutionaries, Gorby told the generals to stand down.”

Today’s generation know little to nothing of that horrible time, nor of the Soviet expansion times that preceded it, though in recent years and months we have witnessed similar horrors in the abrupt, ill-planned surrender of Afghanistan to ISIS terrorists and the handing over of freedom-thriving Hong Kong to the Chinese communists.

I wonder whether the near-marxist-driven history revisionists who are allowed and encouraged to increasingly influence our children’s history textbooks allow such realities to be learned. … A reflection that brings us back to the remarkable, historic memory of Gorbachev and Reagan…

Below please find a few of the more interesting, culled articles on Michael Gorbachev: