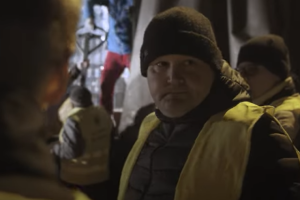 GOD BLESS THE KNIGHTS OF COLUMBUS, especially in Poland and Ukraine: What they are doing is Amazing!

Tears well up as we watch the short video below. While mainstream news, other news outlets, pundits, historians and “experts” of every stripe and perspective flood the airwaves and internet regarding the nightmare unfolding in Ukraine, the Knights of Columbus took—and are taking—strategic and meaningful action, quickly.

Since Russian forces launched a large-scale military invasion of Ukraine on Feb. 24, members of the Knights of Columbus in Ukraine, Poland and the United States have launched an unprecedented humanitarian effort to help the growing number of refugees displaced by the largest conventional military attack in Europe since World War II.

“Many Europeans were not ready to believe that a land war could happen again in Europe, so the Russian attack has not only been shocking, but a game-changer that will have long-lasting consequences for Europe and for the world,” Kelly said.

“I can say that I have met those members and that they are very solid Catholics, very enthusiastic in how they stand for charity, unity and fraternity — the true Knights’ spirit,” Kelly said.

Kelly sent a video message to all Ukrainian Knights “telling them that I was praying for them, that I was asking God for assistance, and recalling for them that several  proud moments in the history of the Knights of Columbus have come in the midst of tremendous challenge, such as the response of the Knights during the First and Second World Wars,” he said.

A truck shuttle going from the eastern part of Poland into Western Ukraine, is being manned by Knight of Columbus volunteers, and provides a direct means for making sure that food, medical supplies, and adequate clothing are reaching Lviv, Ukraine’s western-most major city, and then distributed by the local Ukrainian Knights.

“It has been amazing to see these brave Polish Knights, completing one successful trip this week and planning a second one immediately,” Kelly said.

The second project, Kelly explained, is that “we have started a Knights of Columbus Mercy Center on the Polish side of the border with Ukraine, where refugees can get respite, food, water, shelter, communication support and where they can stay until Polish friends or family can meet them and bring them to a final destination.”

Kelly also expressed surprise and joy at the amount of support the Ukraine Solidarity Fund received from the Knights of Columbus in such a short time.

“The call has had an enormous success, like something that we have never seen. We have raised $2 million from our members, and our headquarters is putting another $1.5 million, so $3.5 million dollars are going 100% directly to humanitarian assistance,” he said.

The Supreme Knight explained that the fundraising campaign will continue, “because we are going to work very closely with the Greek Catholic Archdiocese in Ukraine and His Beatitude Sviatoslav Shevchuk, and we are also working with the Latin Archdiocese in Lviv, with Archbishop Mieczysław Mokrzycki, to make sure that the humanitarian help goes to where it needs to go.”

Kelly explained that the Knights are going to continue with the campaign to assist refugees, given the possibility of an extended ground war, coupled with the need eventually to rebuild.  “Right now there are currently 1.2 million refugees and experts are expecting that number to quadruple,” Kelly said.

“We have gone out to all of our members encouraging them to continue to pray, fast, and give alms, so as to respond to Pope Francis’ request,”  he said. You can learn more about the relief effort in the Knights of Columbus video below.

Kelly anticipates that his team will reach out personally to each council during Lent and that most will be able to respond in a communal way to help Ukraine.

“Many people feel very helpless when they see this war machine rolling into Ukraine, but praying, fasting and providing funds for the humanitarian situation is a very real, very concrete way to help,” he emphasized.

“Blessed Father Michael McGivney founded our fraternal organization to help the vulnerable,” underscored Kelly. “At that time [the vulnerable] were widows and orphans, but the vulnerable may change, and in this situation the vulnerable are the Ukrainian families, women and children, and we as Knights are responding accordingly.”

Regarding the worldwide shift that the Russian invasion will bring, the Supreme Knight explained that “we will still have to see how things develop, but some of the first lessons are that we can’t take democracy or free elections for granted; and specifically from the perspective of the Knights of Columbus, we are being confirmed in the need for solidarity and unity and the way in which that universal entity, that is the Church, can bring it to the world.”

Asked for his thoughts on his first year as Supreme Knight being marked by such an unexpected crisis, Kelly was quick to respond, “When you are in a leadership role, you never know the situation you will be dealing with. You have to trust in God because we could never anticipate that Russia would be going into Ukraine.

“So from a spiritual perspective, it is all trusting in the Lord. For me personally, God has been so good to me in the last year in terms of assistance. I start every day on my knees and that’s what sustains me, because our faith is in Jesus Christ and all we do is work to do His will.

“We cannot plan everything, the Lord has His ways and all we can do is respond.”

“…the Knights of Columbus will have to be here for the long haul,” Supreme Knight Patrick Kelly added.

Kelly concluded the interview by recounting a recent personal experience of entrusting all to the Lord.

“I was recently at the Vatican and I had the opportunity to go to Mass in the chapel of Saints Benedict, Cyril and Methodius, the co-patrons of Europe, in the Vatican grotto,” recounted Kelly. “The Knights helped to restore that chapel and we went there specifically to pray for Europe and to pray for the end of the tensions between Ukraine and Russia. But within days we saw the invasion.”

“So, in this defining moment of history, we are here for the long haul. It will take a long time for the world to digest this and see how to respond,” Kelly said. “Meanwhile, the Knights will not relent in our humanitarian response to this aggression.”